Google To Launch Pixel 6a in India After Gap of Two Years: Report

Google was not able to sell Pixel in India due to its 'Soli Radar chip' on the front, which utilised the 60GHz frequency band banned for commercial use in India. 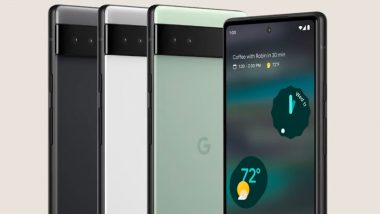 Google Pixel 6a (Photo Credits: Made By Google)

New Delhi: Google will finally bring its Pixel 6a smartphone to India, after a gap of nearly two years. Google was not able to sell Pixel in India due to its 'Soli Radar chip' on the front, which utilised the 60GHz frequency band banned for commercial use in India. Speaking to Android Central, the company confirmed that the Pixel 6a will be sold in India "later in 2022." Google Pixel Android Tablet, Pixel 7 Series, Pixel Watch Unveiled.

Google's last new smartphone for India was Pixel 4a, which made a delayed debut in India in October 2020. The newly-launched Pixel 6a is coming soon to Australia, Canada, France, Germany, Ireland, Italy, Japan, Puerto Rico, Singapore, Spain, Taiwan, the UK and the US.

🧠 Adapts to you w/ Google Tensor

"Pixel 6a is packed with the same powerful brains, Google Tensor, and many of the must-have features as our premium phones Pixel 6 and Pixel 6 Pro, at a lower price of $449," Soniya Jobanputra, Director of Product Management at Google, said in a statement late on Wednesday.

"Pixel 6a helps capture your most important moments with a Camera Bar that includes dual rear cameras: a main lens and an ultrawide lens," said the company.

The India pricing of the smartphone is yet to be announced. The device will come in three finishes -- Chalk, Charcoal and Sage. Pixel 6a comes with the same highly accurate speech recognition as Pixel 6 Pro. That includes features like Recorder, Live Caption and Live Translate.

Pixel 6a comes with an all-day battery that can last up to 72 hours when in the Extreme Battery Saver mode -- a first for Pixel phones, said the company. The device will be available for pre-order starting at $449 on July 21 and on shelves on July 28.

(The above story first appeared on LatestLY on May 12, 2022 12:41 PM IST. For more news and updates on politics, world, sports, entertainment and lifestyle, log on to our website latestly.com).