In addition to the touch-sensitive halo ring, the drawings also suggest the Mate 40 Pro will have a quad-camera array on the back, just like its predecessor. 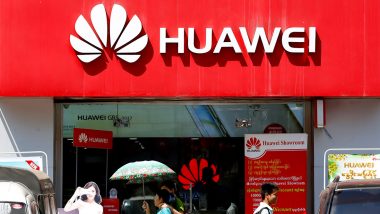 Beijing, March: Chinese smartphone giant Huawei's flagship Mate 40 Pro could feature a Halo ring which might actually house a touch display. According to a new patent granted to the handset maker, the touch-enabled ring will allow users to do things like control the volume, accept or reject phone calls, flip pages, and more, Android Central reported on Tuesday. As per the drawings included in the patent application, the circular touch display embedded inside the halo ring will enable users to control the volume, flip web pages, zoom in or out while using the camera. Huawei Opens Its First Flagship Store in France: Report.

In addition to the touch-sensitive halo ring, the drawings also suggest the Mate 40 Pro will have a quad-camera array on the back, just like its predecessor. Earlier, there were reports that the upcoming P40 Premium could pack in two telephoto cameras. The P40 Premium will have a periscope module with f/4.0 aperture and 240mm equivalent lens will provide 10x optical zoom (at an unknown resolution), while an 8 MP f/2.0 80mm equivalent will have 3x optical zoom, out of a 1/4 inch sensor.

(The above story first appeared on LatestLY on Mar 26, 2020 09:27 AM IST. For more news and updates on politics, world, sports, entertainment and lifestyle, log on to our website latestly.com).