Huawei P50 Flagship Smartphone To Be Launched Globally on July 29, 2021

Huawei will finally launch its next flagship P50 globally on July 29, as chip shortage hits smartphone vendors. The company announced the P50 launch on its account on Chinese social media platform Weibo. 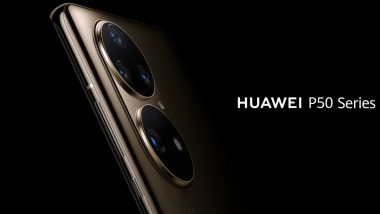 The P50 smartphone would mark the beginning of "a new era of mobile imaging," said Richard Yu, Executive Director and CEO of Huawei's Consumer Business Group. You teased the design of P50 last month, saying that "For reasons you are all aware of, a launch date has not been set".

On 29th July, we will be unveiling our newest products at the HUAWEI New Flagship Products Launch. Stay tuned to find out more.#LiveSmartWithHuawei pic.twitter.com/Be6dgSvOVh

The P50 is likely to come with the new HarmonyOS 2.0. The Chinese conglomerate began work on its own OS as major chips and technologies from the US were not available to the company since May 16, 2019 due to restrictions imposed by the earlier Donald Trump administration amid the trade war between US and China. Huawei's consumer businesses faced a tough time due to inability to use Google's ecosystem in overseas markets.

(The above story first appeared on LatestLY on Jul 20, 2021 08:46 AM IST. For more news and updates on politics, world, sports, entertainment and lifestyle, log on to our website latestly.com).