Micromax In 2c To Be Launched Tomorrow in India

Homegrown smartphone maker Micromax on Sunday announced that it is all set to launch a new smartphone, IN2c, for its users in the country on April 26. 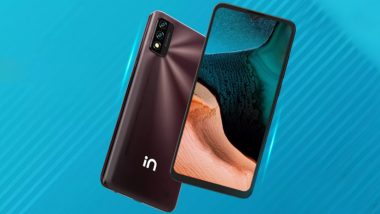 New Delhi: Homegrown smartphone maker Micromax on Sunday announced that it is all set to launch a new smartphone, IN2c, for its users in the country on April 26. The company posted a picture of the smartphone with the launch date mentioned in it on the microblogging site Twitter and also asked users "are you ready to be smart?". Micromax In Note 2 With Quad Rear Cameras Launched in India at Rs 13,490.

Meanwhile, a Flipkart landing page revealed that the upcoming smartphone will be powered by the UNISOC T610 chipset and a massive 5,000mAh battery. And, the device will be available in Silver and Brown colour options. The smartphone is said to feature a 6.52-inch HD+ display with a 20:9 aspect ratio, 420 nits of brightness, and an 89 per cent screen space.

According to GizmoChina, Micromax IN2c may carry a sub-Rs 10,000 price tag. It may come with a 5MP camera on the front for selfies. The back of the phone may have an 8MP main camera and a VGA sensor. The UNISOC T610 chipset will be coupled with 4GB/6GB of LPDDR4x RAM. Both variants will be equipped with 64GB of eMMC 5.1 built-in storage. For additional storage, the device will arrive with a microSD card slot. The device will offer other features such as the Android 11 OS, a USB-C port, and a 3.5mm audio jack. It lacks a fingerprint scanner.

(The above story first appeared on LatestLY on Apr 25, 2022 08:39 AM IST. For more news and updates on politics, world, sports, entertainment and lifestyle, log on to our website latestly.com).