OnePlus 10 Pro is said to debut in India and the global market later this year. Ahead of its launch, the device has been reportedly spotted on multiple certification websites. 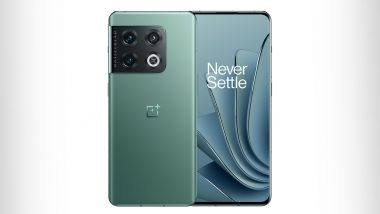 OnePlus 10 Pro is said to debut in India and the global market later this year. The handset was launched in China earlier this year. Ahead of its launch, the device has been reportedly spotted on multiple certification websites, including NBTC, Camerafv5 and Geekbench, hinting towards imminent launch. OnePlus 10 Pro Sold Out in a Second of its First Sale in China, Says Report.

According to a report from MySmartPrice, a OnePlus device with the model number NE2213 has been listed on the NBTC website, which confirms the name of the phone as OnePlus 10 Pro 5G. The Geekbench listing reveals that the handset will come with 12GB of RAM, Android 12 OS and Snapdragon 8 Gen 1 processor. On the other hand, the Camerafv5 website has revealed the camera details of the phone.

OnePlus 10 Pro 5G is likely to get a 48MP primary camera with a SonyIMX789 sensor, a 50MP ultra-wide-angle lens and an 8MP telephoto shooter. At the front, the device could come with a 32MP snapper for selfies and video calls. It is said to feature a 6.7-inch QHD+ AMOLED screen with a refresh rate of 120Hz and a resolution of 3612x1440 pixels. The handset is likely to pack a 5,000mAh battery with 80W SuperVOOC fast charging support. OnePlus 10 Pro 5G starts at CNY 4,999 (approximately Rs 58,000) in China. So we expect the Indian model to be priced somewhere around it.

(The above story first appeared on LatestLY on Mar 11, 2022 10:34 AM IST. For more news and updates on politics, world, sports, entertainment and lifestyle, log on to our website latestly.com).