OnePlus 7, OnePlus 7 Pro Launch Date Leaked? Likely To Be Launched Globally on May 14 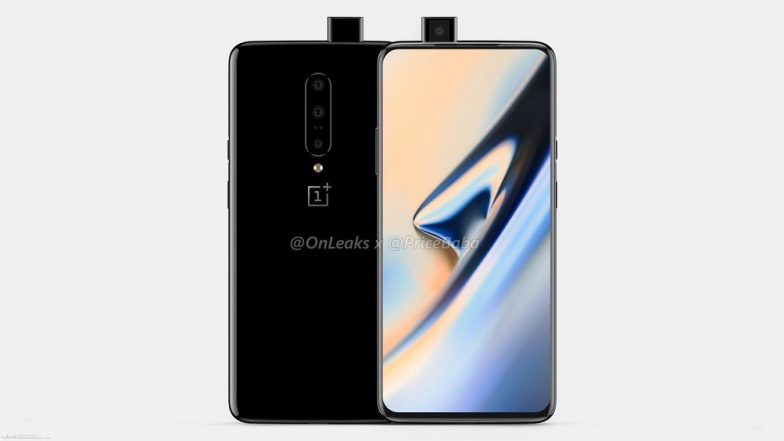 It is important to note that there is no official date confirmed for the launch of OnePlus 7 series as of now. So, it is advised that this piece of information should be taken with a pinch of salt. Talking about the leaked image, the OnePlus 7 Series phones will come with a tagline of 'Go Beyond Speed'. Recently, OnePlus 7 Pro images were leaked online, which revealed some key specifications and features.

Okay, so I'm gonna stop with the estimations and give you all what you want. I can confirm that #OnePlus7 Series is launching globally on "14th May" 2019! Exactly 1 month left for #OnePlus' Flagship Killer to be revealed! According to earlier leak: #GoBeyondSpeed! #OnePlus7Pro pic.twitter.com/KlUpHjZms7

The images confirmed notch-less and bezel-less design on OnePlus 7 Pro which reportedly became possible because of the pop-up selfie camera. Now, we have already seen some smartphones with pop-up technology such as Vivo V15 Pro and Oppo F11 Pro. OnePlus 7 Pro With Curved OLED Screen Leaked Online Ahead of Launch.

Coming to the hardware aspect, OnePlus 7 Pro will be powered by Qualcomm's latest processor - Snapdragon 855 SoC, which is also seen on Galaxy S10 series and Huawei P30 Pro. The chipset will be coupled with 8GB of RAM and up to 256GB of internal storage. The phone will sport a 6.67-inch Super optic AMOLED display and will run the latest version of Android 9 Pie based on OxygenOS. For photography, the handset will be packed with a triple rear camera setup comprising of 48MP + 16MP + 8MP sensors. However, the specifications of the front camera are not known yet. More details and specifications are expected to be revealed soon. Going by OnePlus' previous trends, we can expect OnePlus 7 and OnePlus 7 Pro India debut immediately after the global as India is an important market for the phone maker. However, the company is yet to confirm the launch date of OnePlus 7 Pro and OnePlus 7.