OnePlus has always offered a top-notch design on its smartphone. And, OnePlus 8 is no different here. It is a well-built handset featuring a glass and metal element with a curved front and rear. 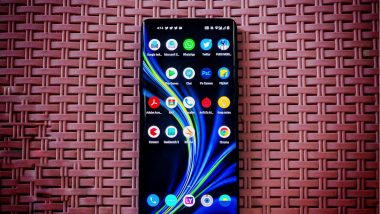 Ever since OnePlus entered into the smartphone market, it has always emphasised on its motto - 'Never Settle'. The Chinese phone brand made it very clear from the beginning itself, that it is here to launch some flagship killer phones. Well, let's be clear here. OnePlus has come a long way from its first smartphone, and undoubtedly, the brand is not settling further. The question that truly matters here, is the brand sticking to flagship killer tag? Let's find it out. OnePlus Nord Smartphone to Feature a 105-Degree Ultra-Wide-Angle Secondary Front Camera.

After spending more than four weeks with the OnePlus 8, it is safe to say that OnePlus 8 Pro's smaller sibling ticks all the boxes that a premium smartphone should feature. We got the Onyx Black colour variant to lay our hands-on and give an impression about the device. OnePlus launched the new OnePlus 8 series in India earlier this year, intending to lead the race of the flagship phones. The latest Android smartphone is, undoubtedly, OnePlus' best premium product till date, unless we are not talking about the Pro derivative.

Talking about the looks, OnePlus has always offered a top-notch design on its smartphone. And, OnePlus 8 is no different here. It is a well-built handset featuring a glass and metal element with a curved front and rear. The brand has opted for all-screen formula upfront by positioning a hole-punch for the camera on the front. Being a premium smartphone, one expects something out of the display, and a 6.55-inch FHD+ display AMOLED 90Hz fluid display is a real treat here. The display and bright offering crisp.

It is one of the few displays that manages to maintain display quality in direct sunlight. Notably, the 90Hz refresh rate is slightly step down as far as the elder sibling is concerned. Offering a display with 120Hz refresh rate would have been an added advantage over the OnePlus 7T, as the fact that the latter too comes with the same refresh rate. In the end, it doesn't make much of a difference. The display size is another highlight of the phone, which matter to a lot of people out there. And, it is one of the few smartphones that you can easily use one-handed

To Be honest, OnePlus has extensively worked on this aspect by offering the device with a 4300 mAh removable battery. We are quite impressed with the phone's battery life and it offered at least seven and a half hours of screen on-time. This was tested with the highest setting at FHD and 90Hzx that the phone can handle. As far as the charging is concerned, OnePlus has bagged some goodies here as well. 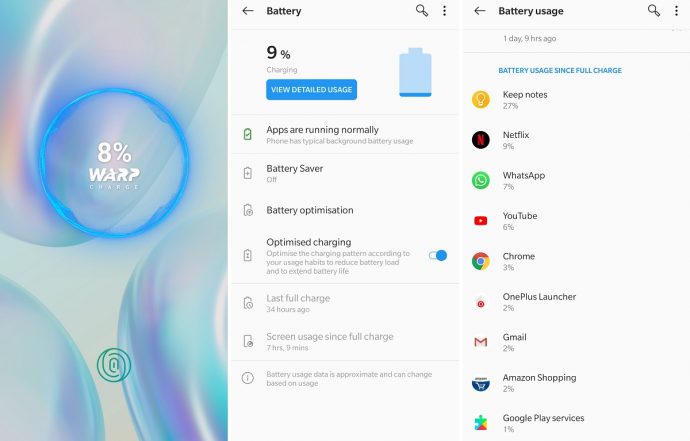 The phone took around 70 minutes to fully charge from 5 percent of battery remaining at its disposal, thanks to Warp Charge 30T fast charging. With this fast charging capabilities, we certainly didn't regret that OnePlus didn't offer wireless charging on the Phone. Well, who needs it when you got a fast charging technology to feed up the phone under 70 mins.

The first remark about the OnePlus 8 camera hasn't been that remarkable, as it is not as sharp as we expected it. And, the telephoto lens is also not that sharp, as the aperture is lower. We also faced a tough time capturing macro shots that we could say are sharp enough. We found the Camera on OnePlus 7T sharper than the OnePlus 8. That's weird. Right? Well, we expect OnePlus to resolve this issue with the next couple of updates, hopefully. 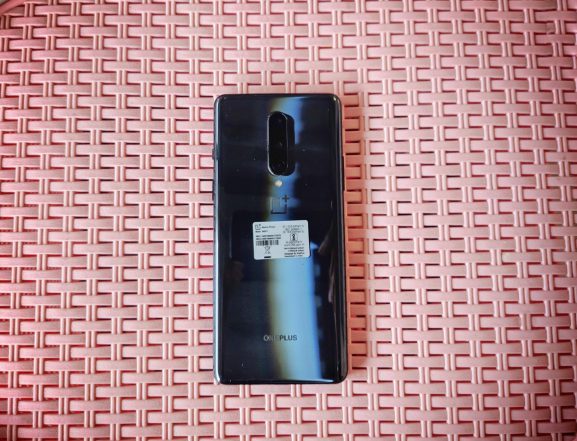 And, we have seen this particular issue in the previous OnePlus phones as well. As this point in time, we can't recommend the OnePlus 8, especially, because of its camera. Apart from this, every box on our list is ticked perfect and right. So, if you can live with this camera, literally not live, as OnePlus is expected to bring some improvements here, then OnePlus 8 should be on your list.

OnePlus has packed this thing with the Qualcomm's flagship chipset - Snapdragon 865, which is also offered on OnePlus 8 Pro. This chipset is a performance-oriented monster not only on paper but also in reality. Qualcomm’s Snapdragon 865 chip offers not only better performance but also enhanced power consumption over its predecessor. The phone is a totally a flier, especially because of the 12GB RAM assisted by Qualcomm Snapdragon 865 chipset. This combination gives the users an experience of a flagship device, what usually a user desires from a high-end phone. 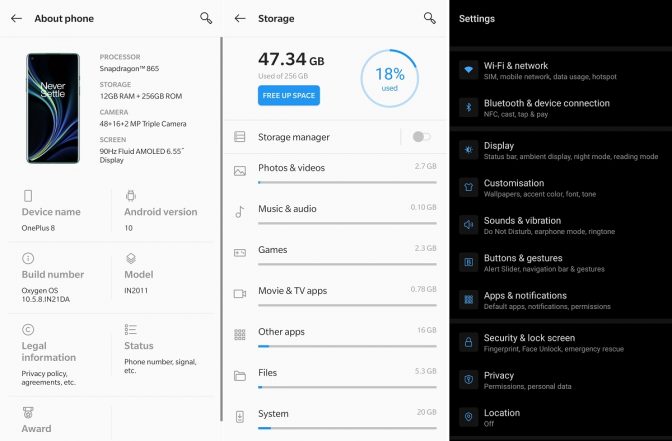 Then, there's a display with a 90Hz refresh rate, which brings a real smooth that converts performance into a visual experience. And, playing high powered games on this device brings an added advantage for game lovers as it can handle typical loadouts with ease. The same can be said while playing games with 90Hz mode activated. We have been using this phone for at least a month now, and we can safely say this phone is a true masterpiece in every aspect, be it gaming, multi-tasking, speed, performance and anything whatsoever. This device doesn't fail to impress every time it's put on the task.

OxygenOS always has been OnePlus' customer-centric offering since day one. Alongside every new generation OnePlus smartphone, it comes hooting with new features. The phone gets a customised version of Android 10 which now brings a bunch of new features such as dark mode, new dynamic background images, improved fingerprint sensor and more. The dark mode is now compatible with several other applications, which is optimised to offer better battery life. 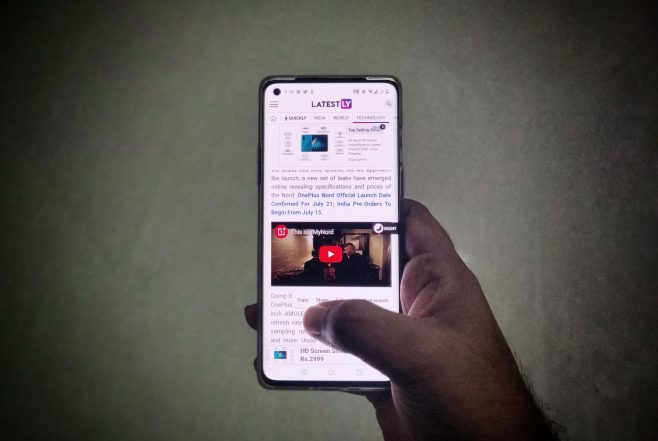 The dynamic background images can change tones depending on the ambient lighting. Isn't it cool?. Another highlight of the phone is its facial recognition feature, which is even faster than Apple's FaceID. You just need to look at OnePlus 8 and the phone is ready for you. In this pandemic hit world, the phone was not able to unlock with a face mask on, for obvious reasons. So, every time it was a fingerprint scanner that can rescue.

Verdict: Should You Buy OnePlus 8 Over OnePlus 7T?

That's a big dilemma that majority of us are facing. But, we got to answer that for you. OnePlus launched the smartphone at a very strange yet tight spot this year. The price difference between the OnePlus 8 and OnePlus 7T is around is approximately Rs 4,000. However, the latter is up for sale at Rs 34,999 that takes the difference to Rs 7,000. 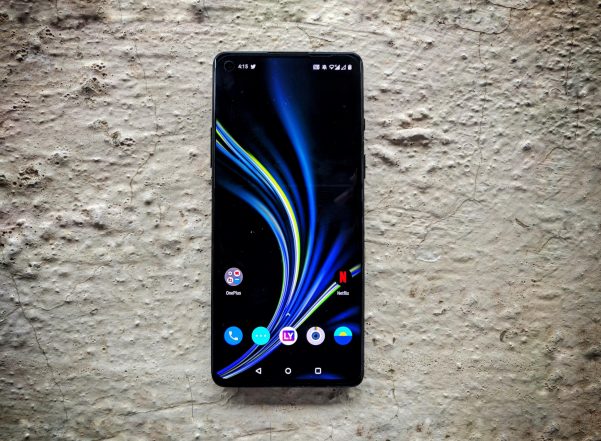 Now, that's a big difference in price point. If you are willing to spend Rs 41,999 for 5G access. But, we would recommend OnePlus 7T over OnePlus, if you are looking for your first premium smartphone, as it would give you the desired flagship experience and also will save some bucks.

(The above story first appeared on LatestLY on Jul 17, 2020 06:15 PM IST. For more news and updates on politics, world, sports, entertainment and lifestyle, log on to our website latestly.com).