Earlier this week, we heard speculations regarding the launch of the Oppo Reno7 Series in China. Now, the specifications of Oppo's Find X4 Pro smartphone has come up. 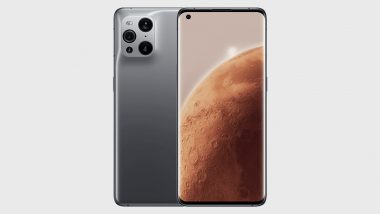 Earlier this week, we heard speculations regarding the launch of the Oppo Reno7 Series in China. Now, the specifications of Oppo's Find X4 Pro smartphone has come up. The company had launched the Find X3 Series last year, which consists of Find X3 Pro, Find X3 Neo and Find X3 Lite. Now, it seems like the company is planning to launch the Find X4 Series next year. A known tipster who goes by the name of Digital Chat Station has also revealed several key specifications of the Find X4 Pro smartphone on Weibo. Oppo Reno7 Series Full Specifications Leaked Online Ahead of Its Launch.

According to the tipster, Oppo Find X4 Pro will feature a 6.7-inch display with a QHD+ resolution and a refresh rate of 120Hz. For optics, it is said to come with a triple rear camera setup that might comprise a 50MP main lens, an ultra-wide-angle lens and a 13MP or 12MP camera with 2x optical zoom. At the front, there could be a 32MP snapper for selfies and video calls.

The device is likely to be powered by a Qualcomm Snapdragon 8 Gen1 processor coupled with 12GB of RAM. Earlier this month, Mukul Sharma had revealed that the Find X4 Pro phone might come with 125W charging support. The company had unveiled the 125W flash charger last year. The charger is claimed to charge the smartphone to 41 percent in 5 minutes.

(The above story first appeared on LatestLY on Nov 25, 2021 04:56 PM IST. For more news and updates on politics, world, sports, entertainment and lifestyle, log on to our website latestly.com).