Popular Google Doodle Games: Stay and Play Hip Hop by Making Your Own Music Tracks at Home in the Popular Past Google Doodle Series 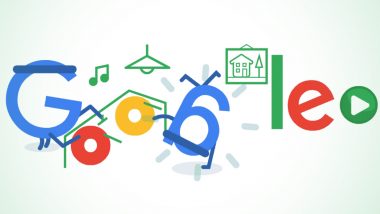 Ever since the Coronavirus pandemic has spread across, people have been forced to stay indoors for more than months now. To ensure that they do not get bored and keep themselves entertained, search engine Google has brought back its popular google doodle games. In this series, they look back at some of their most popular interactive games. Today's Google doodle is for those who love listening to Hip Hop. Named Hip Hop, the game allows a user to make music from legendary tracks. This doodle is from 2017, marking the 44th anniversary of the Birth of Hip Hop. Let us tell you more about how to play this game. Popular Google Doodle Games: Stay and Play Halloween By Following Momo to Her Mission at Home in the Popular Past Google Doodle Series.

The doodle features Fab 5 Freddy, the first host of the groundbreaking and first internationally telecast hip-hop music video show Yo! MTV Raps. The doodle shows Freddy giving information about hip-hop and popular stars. The doodle then transforms into a DJ box with records in the background. The user have to select the record, adjust the tempo, create the blends. There are levels in the game which reveal facts about important people from the hip-hop movement. How to Play Popular Google Doodle Games? Stay and Play Lotería Game at Home, Here Are List of Other Past Google Doodles From Cricket to Coding.

How to Play The Game?

Once you click on the doodle, it takes into a DJ booth with two turntables. Select two records from the collection. Use the cursor to adjust the music, like the beats and tempo. With a fader at the bottom, you can adjust the volume. You can change the speed from the control buttons on the side. The trophy on the top will let you know if you have unlocked the level. If you pass, it reveals new tracks. One must really have good knowledge of earlier hip hop music to excel at this game.

This was a first-of-its-kind Doodle featuring a custom logo graphic by famed graffiti artist Cey Adams, interactive turntables on which let users mix samples from legendary tracks. The doodle emphasises on the founding pioneers of the movement. The doodle "acknowledge and celebrate a cultural revolution". If you are aware of the old hip hop tracks then you should participate in this game.

(The above story first appeared on LatestLY on May 07, 2020 12:00 AM IST. For more news and updates on politics, world, sports, entertainment and lifestyle, log on to our website latestly.com).