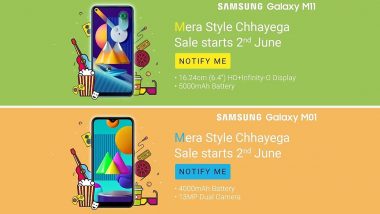 Samsung, the leading smartphone brand is all set to launch two new smartphones in the Indian market. The South Korean phone manufacturer is all set to launch Galaxy M11 and Galaxy M01 smartphones in India on June 2, 2020. This information was officially confirmed by Flipkart as both the devices were teased online by the e-retailer. The teasers also confirm that both the devices will be made available for sale via Flipkart. The new Galaxy M11 will be launched as a successor to the Galaxy M10 and essentially an upgrade to the Galaxy M10s. On the other hand, Galaxy M01 is likely to be a new entry-level offering from the phone maker. Samsung Galaxy A31 Smartphone Confirmed to Be Launched in India on June 4.

The Flipkart teaser also gives us the first glimpse of the smartphones ahead of launch. The teasers of the Galaxy M11 and Galaxy M01 are listed on Flipkart's official website and mobile app, confirming the launch dates of the handsets. The launch event is scheduled to take place at 12 pm IST.

The teasers hint at the display and battery details of the Galaxy M11. It will carry a 6.4-inch HD+ display with a hole-punch design carrying a resolution of 720x1560 pixels. Under the hood, the phone will get an octa-core chipset which will be paired with up to 4GB of RAM. For photography, there will be a triple rear camera module featuring a 13MP primary sensor along with 2MP depth sensor and a 5MP wide-angle shooter. For selfies, the handset will pack an 8MP snapper at the front along with an f/2.0 aperture. It will be backed by a 5,000mAh battery supporting 15W fast charging.

Coming to the Galaxy M01 smartphone, Samsung is yet to reveal specifications of the handset. However, the Flipkart teaser confirms that the phone will get dual cameras at the back. Other highlights of the smartphone are likely to be 4,000mAh battery, 5.7-inch HD+ waterdrop notch display, Qualcomm Snapdragon 439 SoC, 5MP selfie camera and much more.

(The above story first appeared on LatestLY on May 30, 2020 11:29 PM IST. For more news and updates on politics, world, sports, entertainment and lifestyle, log on to our website latestly.com).