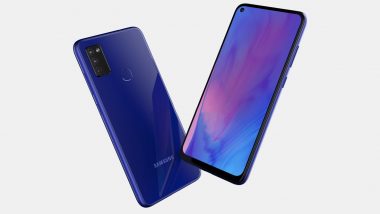 Samsung, the South Korean smartphone maker is working on the Galaxy M41 handset. There were rumours that Samsung will discard the Galaxy M41 out of its M-series but the smartphone has been spotted on the 3C certification website. So we might expect the launch of Galaxy M41 soon. Samsung Galaxy A31 Smartphone’s Price Slashed by Rs 1,000 in India; Now Available at Rs 20,999.

In terms of specifications, the Galaxy M41 could come packed with a 6,800mAh battery that is used by some premium tablets. The mobile phone is also rumoured to house an Exynos 9609 chipset. For photography, the device is likely to come equipped with a triple rear camera setup flaunting a 64MP main camera, a 12MP ultra-wide angle lens & a 5MP depth sensor. For display, the handset could sport a 6.3-inch bezel-less FHD+ punch-hole display carrying a resolution of 2340x1080 pixels.

The Galaxy M41 might be offered with 6GB of RAM & 12GB of internal storage. The smartphone may run on Android 10 operating system. For connectivity, the handset may also get Wi-Fi, Bluetooth 5.0, a Type-C port & a 3.5mm headphone jack. More specifications & pricing of Samsung Galaxy M41 will be revealed during its launch event.

(The above story first appeared on LatestLY on Jul 06, 2020 09:31 AM IST. For more news and updates on politics, world, sports, entertainment and lifestyle, log on to our website latestly.com).