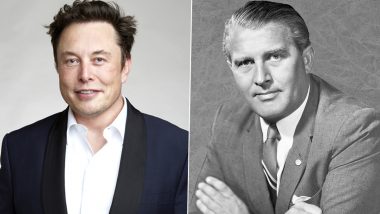 It appears there aren’t enough headlines already about the CEO of Tesla Motors and SpaceX founder Elon Musk, that there now resurfaces a connection between his name and a decades-old book! If dogecoin’s recent dip after Musk’s appearance on SNL has upset you, or you are just too bored with the doge obsession, here’s something about the billionaire that you might be interested in knowing. Well, it seems in the 1950s, German rocket scientist, Wernher von Braun eerily predicted Musk’s plot to colonise Mars. Writing in his 1953 science fiction novel, ‘Project Mars,’ engineer Braun described a man called ‘Elon’ who ruled over the Red Planet.

SpaceX recently became the first private outfit to launch NASA astronauts into space. It seems strange that Musk’s ambitions were seemingly prophesized by someone in the 1950s. Von Braun was one of the most important scientists of the 20th century and a key figure in the development of rocket technology in Nazi Germany. After World War II, he was secretly moved to the United States and became a pioneer of space technology for NASA. His book ‘Project Mars’ may have been science fiction, but as per researchers, it includes scientific calculations for how humans might travel to Mars. It takes place in then-distant 1980 and features human colonists on Mars whose leader uses the title, ‘Elon.’ The book’s spooky prediction about ‘Elon’ leading humans to the Red Planet was unearthed a few years ago.

In 2020, a tweet by space reporter Toby Li sharing a passage of the book detailing that a “Martian government was created, led by ten men.” Those men worked under a leader called, ‘Elon.’

Speaking about destiny, did you know that Von Braun's 1953 book "Mars Project," referenced a person named Elon that would bring humans to Mars? Pretty nuts pic.twitter.com/m28yFU4Ip6

Even Musk Responded to the Tweet Suspiciously, Asking If It Was for Real!

Are we sure this is real?

Yeah it's real. This is the English transcript of the same book ... But "Elon" referred by Von Braun in the book isn't the name of the person but rather the name of the position something like an elected meritocratic president pic.twitter.com/GADiMJHxLp

Due to the obvious name association and space lovers on Twitter, the passage resurfaced online. Many shared the same passage and more tweets related to it on the microblogging platform.

@elonmusk will rule the Mars as Wernher von Braun wrote on Project Mars: A Technical Tale in 1953. 💥 Guess what #dogecoin will be currency of Mars! 💣🙋🏻‍♂️🧿 pic.twitter.com/E7W0HcoQts

Chances are that the connection between Von Braun’s novel and the SpaceX founder is purely coincidental. But, it is certainly interesting to imagine that some people are born with a written destiny. Nearly seventy years later, Musk is one of a handful of billionaires with plans to colonise Mars in the next few decades.

(The above story first appeared on LatestLY on May 09, 2021 04:13 PM IST. For more news and updates on politics, world, sports, entertainment and lifestyle, log on to our website latestly.com).