British scientists have accidentally found living creatures under 3,000 feet of ice in Antarctica challenging the assumption that nothing could live in such conditions. The video reveals two types of unidentified stationary animals. Know more about the latest discovery. 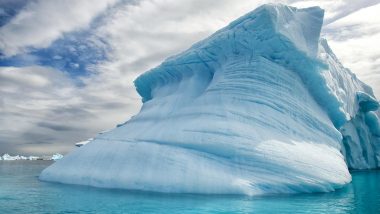 UNBELIEVABLE! Life in Antarctica’s frigid temperatures, something which so far was believed impossible found a new definition. British scientists have accidentally found living creatures under 3,000 feet of ice in Antarctica challenging the assumption that nothing could live in such conditions. The findings were made under the Filchner–Ronne Ice Shelf. Experts drilled through the ice before making the discovery. They even shared footage on social media, explaining their discovery, and how it challenged the belief that Antarctica’s cold temperatures and lack of light and food made it impossible for living creatures to thrive.

Antarctica, where a number of governments have set up research stations in support of scientific research on the continent. Many photos often surfaced on the internet, showing how living on the continent, even though for research purposes is like. At the same time, scientists also warn how the continent is losing ice, which can affect the planet. Last year, it was reported that the Thwaites Glacier, also referred to as the Doomsday Glacier is losing ice, threatening catastrophic sea-level rise. Amid all the concern, comes the unexpected discovery of possible life in Antarctica.

The Filchner–Ronne Ice Shelf is a massive floating ice sheet that stretches out from Antarctica. It spans more than 579,000 miles, but very little has been explored under the ice. The scientists from the British Antarctic Survey noted they did not set out looking for life. They were drilling through the ice sheet to collect samples from the seafloor, and was stunned after the discovery. Their camera hit a boulder, and after they reviewed the footage, they found life.

Accidental discovery of extreme life! Far underneath the ice shelves of the #Antarctic, there’s more life than expected: https://t.co/atdkiv1GrA

Discovery of life after drilling through 900m of Filchner-Ronne Ice Shelf in #Antarctica.

The video reveals two types of unidentified stationary animals—the one in red seem to have long stalks, whereas another type of animal, highlighted in white appears like a round sponge-like animal, as explained by Marine Biologist, Dr Huw Griffiths in the video. The scientists reported that their next was to understand whether these animals were from previously unknown species.

(The above story first appeared on LatestLY on Feb 17, 2021 01:43 PM IST. For more news and updates on politics, world, sports, entertainment and lifestyle, log on to our website latestly.com).