Perseid Meteor Shower 2020 to Light Up the Night Sky on August 11 in India: How to Watch Year’s Brightest Shooting Stars? Here’s Everything to Know About the Celestial Event 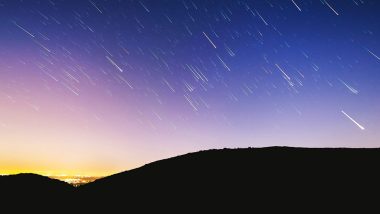 It is another great week for skygazers across the world. The Perseid meteor shower is active since July 17, and it can bring as many as 100 shooting stars per hour on its peak night, which is August 11 and August 12, 2020. Are you ready to spot the year’s brightest shooting stars? We know we are! The Perseids are said to be one of the brightest of shooting stars and the meteor shower lighting up the night sky will add a little wonder and distraction to these pretty dismal times. So, how to watch the Perseid meteor shower? In this article below, we bring Perseid Meteor shower August 2020 date, time and everything to know about the celestial event.

Perseid meteor shower will peak on August 11, (Tuesday) but it will be visible throughout Tuesday and Wednesday night. In India, the celestial event will be visible for two days. The visibility of meteors will be high in the night from 2:00 am to pre-dawn hours.

How to Watch Perseid Meteor Shower?

The Perseids usually appear between July 17 and August 24, as the Earth ploughs through debris shed over the aeons by Comet Swift Tuttle. The Perseid meteor shower usually put on a memorable show, with observers under clear, dark skies typically spotting 45 to 90 meteors per hour during the shower peak. So, how to watch or spot the Perseid meteor shower? A good strategy would be to head out to look for the Perseids as late in the evening as possible, but before the moonrise at your location. Find a place, which has a sky free of population and too much light. See All Planets of the Solar System Along With The Moon Tonight in a Rare Sighting! Here Is the Time Table For The Stunning Celestial Event.

If it is a clear sky, you will not need any equipment to watch shooting stars. It will be visible at the night sky and can be easily seen through naked eyes. But in case, your nearby location is blocked by clouds; you can watch the celestial event live on the Facebook page of NASA Meteor Shower Watch.

It does not really matter where in the sky you look. As long as you have a broad view, you can enjoy the shooting stars. We are still dealing with the unpredictability of nature, and most parts in India are experiencing monsoon, so, results may vary.

(The above story first appeared on LatestLY on Aug 11, 2020 10:27 AM IST. For more news and updates on politics, world, sports, entertainment and lifestyle, log on to our website latestly.com).