See All Planets of the Solar System Along With The Moon Tonight in a Rare Sighting! Here Is the Time Table For The Stunning Celestial Event 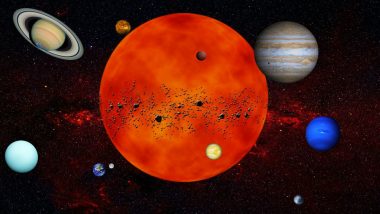 Today aka August 8 is an exceptionally special day for skywatchers who will be able to see a rare astronomical event. Tonight one will be able to see 8 planets of the solar system in Earth's night sky! Yes, all 8 including 7 planets apart from Earth and the moon. After the sunset, you will be able to see all the 8 planets in Earth's night sky because the planets will all be on one side of the Solar System, while the Earth will somewhere be in the middle. One can see Moon, Mars, Mercury, Jupiter, Venus, Saturn and Neptune-Uranus tonight. All the 6 planets can be seen through naked eyes, except for Neptune and Uranus which you need to see using a telescope. Tonight Jupiter will start to appear in the sky from around 7.30 pm after sunset.

Moreover, you will also be able to see the mesmerising ring planet aka Saturn. While Neptune will be seen at 9 pm, the Red Planet, Mars will be visible from 11 o'clock at night. Uranus will be seen at 12 midnight. It is a treat for people who love incredible celestial events. After 3 pm, the brightest planet Venus will rise in the east direction. A few minutes before sunrise, Mercury, the smallest planet of the solar family, will appear at around 5 am. Along with these planets, Earth's satellite moon will also be seen. The moon will start appearing from 10 pm onwards.

Here's the Schedule For The Rare Celestial Event:

This positioning of the planets doesn't occur very often but why do these planets not always appear in Earth's night sky? Well, these planets orbit the Sun at their own pace and are often in the position where it is not possible to see in a day because of the sun.

(The above story first appeared on LatestLY on Aug 08, 2020 02:41 PM IST. For more news and updates on politics, world, sports, entertainment and lifestyle, log on to our website latestly.com).