What The Freak! Hundreds of Mutant Marbled Crayfish Invade a Cemetery in Belgium, Know Everything About These Invasive Self-Cloning Creatures That Can Eat Anything

The Schoonselhof Cemetery in Antwerp has seen a group of hundreds of self-cloning mutant crayfish which were created as a part of an experimental breeding programme. The crustaceans are dangerous as they pose a threat to the local biodiversity. In this article, we tell you what are these marbled crayfish, who made them and how much of a risk do they pose? 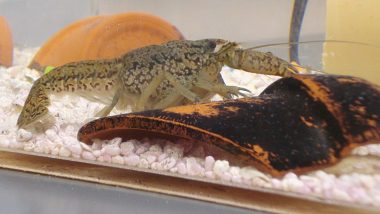 What's more in store for 2020, you ask as we inch towards the end of what is dubbed as apocalyptic year? Then there are mutant self-cloning crayfish, an invasive species that have taken over a graveyard in Belgium. The Schoonselhof Cemetery in Antwerp has seen a group of hundreds of self-cloning mutant crayfish which were created as a part of an experimental breeding programme. The crustaceans are dangerous as they pose a threat to the local biodiversity. In this article, we tell you what are these marbled crayfish, who made them and how much of a risk do they pose? Let us understand more details about these cloned species. Daddy Long Legs Are Invading UK Homes Looking For Sex! Know About Crane Flies, The Long-Legged Insects (View Pics and Videos).

According to the Flemish Institute for Nature and Woodland Research (INBO), these marbled crayfish have attacked the cemetery in Antwerp. Every pond, pool, stream in this region has an infestation of these crayfish and they pose a threat to other water species. Kevin Scheers of the INBO told Brussels Times, "It’s impossible to round up all of them. It’s like trying to empty the ocean with a thimble." He said that someone who had it in their aquarium then released it in a canal and the effects are seen in Berchem area of Antwerp. "Often people get tired of their animals or the marbled crayfish population is getting too large at home," he said, adding that leaving them loose in nature seems a good idea but it definitely isn't.

In US, the first murder hornets nest has been destroyed but it is difficult to keep these crayfish in control. It is unclear to trace when the first crayfish arrived in this cemetery and as of now there is no definite way to catch them all. There is no easy way to getting rid of them.

What Are Marbled Crayfish?

The marbled crayfish is a parthenogenetic crayfish. It means they can reproduce asexually. They were first discovered in 1990s during a pet trade in Germany. All individuals are females and their offspring are genetically identical to the parent. They are about 10-12 cms long and crawls in both water and land. They are an invasive species as it eats anything it can get hold of. It can travel upto 2 km and dig to a depth of one metre. They can thus create new populations across canals and pools. Fish With Human Face and Sharp Teeth Found in Malaysia Will Freak You Out! Know More About This Species of Triggerfish (View Pics and Video).

About their initial existence, there's a hypotheseis that they originated from an error in meiosis forming a diploid gamete. Researchers believe this mutant creature was evolved in mid-1990s after a German aquarium hobbyist bought the crustacean. But he was surprised when it gave hundreds of eggs without a male. He gave away the offspring and it began to be sold in Germany. Because they were easy to take care of, they became attractive as pets.

The crayfish have been spotted in different regions in wild across Germany, France, the Netherlands, Hungary, Denmark - as well as in Israel and Japan. They are viewed as a source of protein in Madagascar.

(The above story first appeared on LatestLY on Oct 27, 2020 03:33 PM IST. For more news and updates on politics, world, sports, entertainment and lifestyle, log on to our website latestly.com).