Wolf Moon 2021 Tomorrow: From Where to Watch This Year’s First Full Moon to Wolf Moon Date & Time, Know Everything About January’s Lunar Event

As we gear up to view Wolf Moon 2021 tomorrow, here we bring you all the important details about the lunar event so that you can enjoy watching it shining bright in the sky. 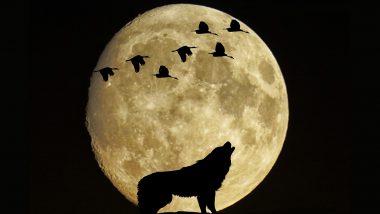 It is almost time! The first full moon of the year will grace the sky tomorrow, January 28, 2021. Called the ‘Wolf Moon,’ it will reach its peak, taking over the sky as the highest full moon of the year. Tomorrow’s lunar event is one of the 12 full moons occurring in 2021. But at what time can you exactly see the Wolf Moon? Why does it carry that name? How can you take the best photo of the full moon? There must time different questions running in your head ahead of the celestial occurrence. Don’t worry, as we got you covered. As we gear up to view Wolf Moon 2021 tomorrow, here we bring you all the important details about the lunar event so that you can enjoy watching it shining bright in the sky.

Wolf Moon 2021 will appear on January 28. The best time to spot the moon is when it reaches its maximum position, which is at 2:18 pm EST, which is 12:48 am IST. So, for people living in India, the first full moon of the year will be visible on January 29. The moon is expected to look big and bright from around January 27 to January 28.

Why is it Called Wolf Moon?

The full moon in January is named as the ‘Wolf Moon’ because, according to The Old Farmer’s Almanac, wolves were more often heard howling at this time. It was traditionally believed that wolves howled due to hunger during winter. This is why, full moons in January are called wolf moon. Other names used for January full moon are ‘Cold Moon,’ ‘Frost Exploding Moon’ and ‘Freese Up Moon.’

How to Watch Wolf Moon?

Skywatchers can catch a glimpse of 2021’s first full moon as it lights up the nighttime from dusk till dawn. To see the wolf moon, astronomy experts suggest people only looking to the eastern horizon. York University astronomy professor Paul Delaney reported that even if skies are not completely clear, the brightness of the moon will still shine through. It will be up all night.

What is the Best Way of Taking Photograph of the Moon?

It is not easy to capture the beauty of the night sky. But certainly not difficult too. To take the best photo of the moon, you need to turn your flash off and your ISO sensitivity down. Setting your focus to 100 will also help to capture the beauty. If you are using a digital camera, you can try an aperture of f/11 to f/16 and a shutter speed of between 1/60th and 1/125th of a second.

If you happen to miss the wolf moon tomorrow or just love stargazing, the next full moon is expected to appear on February 27, called Snow Moon.

(The above story first appeared on LatestLY on Jan 27, 2021 04:02 PM IST. For more news and updates on politics, world, sports, entertainment and lifestyle, log on to our website latestly.com).