Wolf Moon 2021 on January 28: How and When to Watch the First Full Moon of the Year? Here’s Everything You Should Know

Sky gazers must gear up to watch the first full moon of the year. But when to look at the sky to view the wolf moon? In this article, we will bring you all the details associated with January’s wolf full moon, how and when to spot and more. 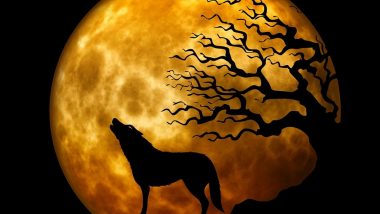 It is time to look up at the sky! A full wolf moon is set to appear on January 28, 2021—this is the year’s and decade’s first full moon. The wolf moon will be shinning throughout January 28, and it will still look big and bright for two or three nights around this date. The lunar event is also referred to as the Moon After Yule and the Old Moon. Sky gazers must gear up to spot the first full moon of the year. But when to look at the sky to view the wolf moon? In this article, we will bring you all the details associated with January’s wolf full moon, how and when to spot and more.

Why is it called a wolf moon? It gets the name because wolves used to how in the direction of the moon and mark their territorial presence. It was the time of the winters, and wolves were more active in the nights. Hence, the moon was known as wolf moon. Also called as the ‘snow moon’ and the ‘ice moon,’ January’s full moon will grace the night sky, at 2:18 pm EST on January 28 that is 12:48 am IST. This means, for people in India, the wolf moon will appear on January 29.

How to Watch the Wolf Moon?

The perfect time to spot the wolf moon is when it reaches its maximum position, which is at 2:18 pm EST on January 28. As it gets higher, the moon will appear smaller. But will be looking big and bright from around January 27 to January 29. So, if in any case, you miss one night, you can always look again. Use a binocular or a telescope to get the best view. Celestial Event Calendar of 2021: Know All Important Astronomical Occurrences of This Year.

Not only a wolf moon, but there are more celestial events to grace the sky this week. Mercury will reach the highest position above the horizon that it almost ever does, Mars will be visible too and seven of the brightest stars in the night sky will together comprise the grand ‘great winter loop’ or ‘winter circle.’

(The above story first appeared on LatestLY on Jan 25, 2021 09:43 AM IST. For more news and updates on politics, world, sports, entertainment and lifestyle, log on to our website latestly.com).