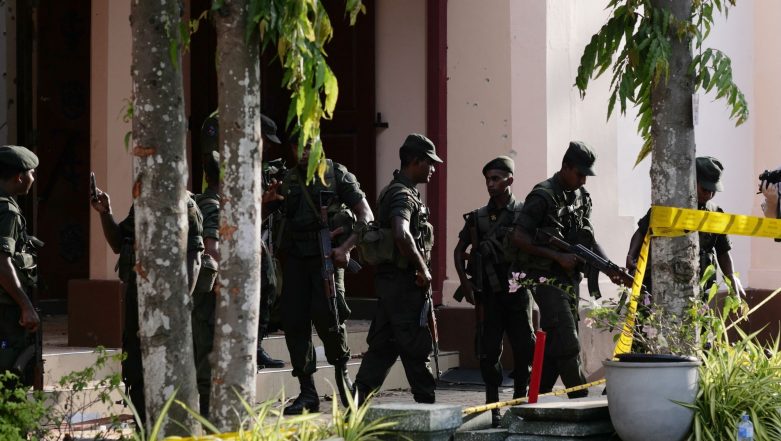 The St. Sebastian's Church where a blast took place is cordoned off in Negombo, north of Colombo, Sri Lanka. (Photo Credits: IANS)

Colombo, April 24: The suicide bombings on churches and luxury hotels on Easter Sunday in Sri Lanka - in which nearly 360 people died - now threatens the economy of the island nation that is largely dependent on tourism. The country, with its pristine beaches, tea gardens and dense forests, is one of South Asia's top tourist destinations. People have now begun to say how the attacks could affect their future, given the uncertainty among visitors, who now no longer see the country as a safe place. Sri Lanka Serial Blasts: Death Toll Climbs to 359, of Which 39 Are Foreigners, Says Police.

"There was not a single person, not a single car, only troops. It was a city in pain. We got the impression of a ghost city in which residents live in fear," French tourist Jean-Marc Ane, who arrived in Colombo on a visit with his wife on the afternoon the attack took place, told Efe news.

On that afternoon, the city was "completely deserted, a curfew had been imposed, which is why there was nobody on the streets even though the Colombo we knew was full of life", he added. Sri Lankan officials said on Tuesday that 40 foreigners were killed in the bombings.

"This will have an impact, in tourism itself. We are looking at that. There may be some outflows (of tourists)," said Prime Minister Ranil Wickremesinghe at a press conference when asked about the economic impact of the attacks.

He said that some tourists had left, which was understandable, but underlined that the tourism industry was functioning smoothly. Tourism Development Authority Chairman Kishu Gomes said that it was still too early to predict the impact of the attacks on the services sector. Several tourist operators have already begun to experience the effects of what appears to be reduced demand as well as the cancellation of forthcoming trips by tourists.

"If the government doesn't take the control of the situation right now and there were to be another explosion, I don't think that the tourism in Sri Lanka would have a good chance," said Janaka, a driver of a tourist vehicle in Kandy.

For Janaka, the effect was immediate as two families who had booked his services for the coming weeks cancelled their trips. He feels that it could impact his future.

According to data from the World Travel and Tourism Council, tourism and services activity accounts for 12.5 per cent of the gross domestic product of Sri Lanka with a population of a little over 20 million, and provides employment to more than 1 million people.

A few hours later, a seventh blast rocked a small hotel near the Dehiwala Zoo, about 12 km south of the capital, while an eighth explosion took place at a residential compound in Dematagoda in Colombo. At least 40 suspects have been detained in connection with the Easter massacre, which was claimed by the Islamic State terror outfit on Tuesday.