To form a majority government, the Liberals would need to win 170 seats. As per the latest updates, the Liberals were leading in 148 ridings, the Conservatives in 103, the Quebec-based Bloc Quebecois in 28 and the leftist New Democratic Party in 22. 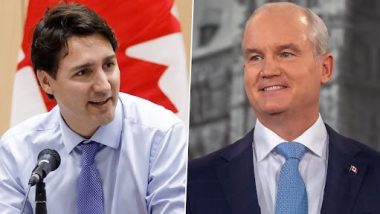 Toronto, September 21: Justin Trudeau is poised for a third term as Canada's prime minister reported Canadian broadcasters who projected a win for his Liberal Party in Monday's elections. Trudeau's ruling Liberal Party received a third mandate in Canada's 44th national election which proves that the party is set to return to power and form a minority government yet again. To form a majority government, the Liberals needed to win 170 seats.

Earlier, Canadians gave Trudeau's Liberal Party a victory in parliamentary elections but were not able to win a majority of seats. As per reports, the Liberals were leading in 148 ridings, the Conservatives in 103, the Quebec-based Bloc Quebecois in 28 and the leftist New Democratic Party in 22.

Ahead of the elections, the top election body in the country, Elections Canada, has said that it may take five days to finish counting all ballots cast in-person and by mail. Trudeau's Liberal Party and the Erin O'Toole-led Conservative Party had been locked neck-and-neck during the polls. Trudeau formally launched his election campaign on August 15 after asking Governor General Mary May Simon to dissolve the 338-member Parliament. Canada Elections 2021: Canadians Vote to Elect 44th Parliament Today, Justin Trudeau Faces Strong Competition from Erin O'Toole; Know All About The Parliamentary Polls,

Canada hosts one of the largest Indian diasporas in the world, numbering 1.6 million people, which accounts for more than three per cent of its total population. Trudeau, 49, called the snap elections two years ahead of its schedule to try and capitalise support for his handling of the COVID-19 pandemic. Candidates, including Liberal leader Trudeau, Conservative leader Erin O’Toole and NDP leader Jagmeet Singh are making last-minute stops to woo voters.

(The above story first appeared on LatestLY on Sep 21, 2021 10:15 AM IST. For more news and updates on politics, world, sports, entertainment and lifestyle, log on to our website latestly.com).