The elections to elect the 44th Canadian parliament are being held on September 20. Recent trends show that the incumbent PM Justin Trudeau is facing a stiff competition from Conservative Party's Erin O'Toole. 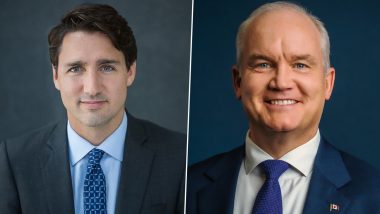 New Delhi, September 20: Canada is set to cast vote to elect its 44th Parliament amid the coronavirus pandemic on Monday, September 20. Notably, the incumbent-Prime Minister Justin Trudeau called for the parliamentary elections two years prior to the schedule which, reports say, is a decision taken to cash on his government's popularity in handling the pandemic and give Trudeau's Liberal Party, which currently hold a minority position, a majority edge in the Parliament. However, the Liberals are facing a head strong competition Conservative Party and its leader Erin O'Toole. Canada Elections 2021: Liberals and Conservatives Neck-and-Neck As Voting Begins.

The Canadian Parliamentary Elections 2021 were announced in mid-August giving the contenders a period of five weeks to campaign for voting on 338 parliamentary seats. Although COVID-19 remains the main issue, economy, housing, climate crisis also are concerning factors in the polls, reports say. In 2019 elections, Justin Trudeau became the Prime Minister of the country for second consecutive term with his Liberal party securing 157 seats while the Conservative Party won on 121 parliamentary seats. Trudeau first came into power in 2015. Canada Elections 2021: Justin Trudeau Calls for Snap Election on September 20.

Here Is All You Need To Know About Canadian Parliamentary Elections 2021:

Since the polls were called amid the coronavirus pandemic, the opposition has heavily criticized the move. O'Toole had repeatedly targeted Trudeau for the same during this election campaign. According the recent data by the Johns Hopkins University, Canada has at least reported over 1.56 million COVID-19 cases, and more than 27,300 deaths due to the virus so far.

(The above story first appeared on LatestLY on Sep 20, 2021 01:09 PM IST. For more news and updates on politics, world, sports, entertainment and lifestyle, log on to our website latestly.com).