The four European nations are part of the Inclusive Vaccines Alliance (IVA) - which has been entrusted by the European Union Parliament to finalise legal agreements for supply of COVID-19 vaccine to the continent. The region is worst-affected by the COVID-19 outbreak after North America. 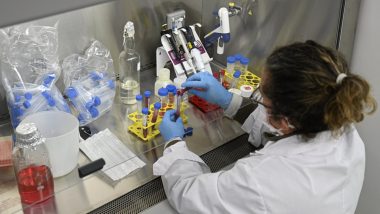 London, June 13: UK-based drug manufacturer AstraZeneca, which has partnered with the University of Oxford to develop a vaccine against coronavirus, signed a deal to supply Europe with 400 million doses by end of the year. The agreement was inked with the governments of Italy, France, Germany and the Netherlands, said a statement issued by the pharmaceutical giant on Sunday. Coronavirus Antibody Treatment: AstraZeneca Nearing Breakthrough on 'Life-Saving' Therapy for Elderly and Vulnerable Patients.

The four European nations are part of the Inclusive Vaccines Alliance (IVA) - which has been entrusted by the European Union Parliament to finalise legal agreements for supply of COVID-19 vaccine to the continent. The region is worst-affected by the coronavirus outbreak after North America.

The agreement with EU nations comes barely a week after AstraZeneca announced that it would initiate the production of coronavirus vaccine even before the final  approval from the UK drug regulator. The green signal from the government body - after the final assessments - is expected in August.

If the vaccine development would begin after the final approval from the government, the production would be further delayed, said AstraZeneca chief executive officer Pascal Soriot.

Soriot, however, added that billions of dollars are risked as the vaccine would not be sold if the government denies permit on safety grounds. But the risk is necessitated in times of such a pandemic, he said.

AstraZeneca, in its statement released today, said the company continues to build a number of supply chains in parallel across the world, including for Europe. The pharma firm is seeking to expand manufacturing capacity further and is open to collaborating with other companies in order to meet its commitment to support access to the vaccine at no profit during the pandemic.

"This agreement will ensure that hundreds of millions of Europeans have access to Oxford University’s vaccine following approval. With our European supply chain due to begin production soon, we hope to make the vaccine available widely and rapidly. I would like to thank the governments of Germany, France, Italy and the Netherlands for their commitment and swift response," Soriot said.

AstraZeneca has recently completed similar agreements with the UK, US, the Coalition for Epidemic Preparedness Innovations (CEPI) and 'Gavi the Vaccine Alliance' for 700 million doses. It also signed a pact with the Serum Institute of India for supply of an additional one billion doses, principally for low- and middle-income countries. Total manufacturing capacity currently stands at two billion doses.

(The above story first appeared on LatestLY on Jun 13, 2020 11:52 PM IST. For more news and updates on politics, world, sports, entertainment and lifestyle, log on to our website latestly.com).