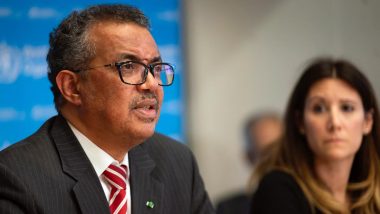 Geneva, May 24: The ongoing vaccine crisis is a "scandalous inequity" that is perpetuating the Covid pandemic, World Health Organisation (WHO) Director-General Tedros Adhanom Ghebreyesus said on Monday.

In his address at the WHO's 74th World Health Assembly, taking place online from May 24 to June 1, he said: "More than 75 per cent of all vaccines have been administered in just 10 countries." The fate of the rest of the world is controlled by a small group of countries that are making and buying the majority of the vaccines, he added..

If the vaccines had been distributed equitably, the doses "administered globally so far would have been enough to cover all health workers and older people". "We could have been in a much better situation," he lamented. COVID-19 Vaccine Update: Bharat Biotech Submits 90% of Documents to WHO for Emergency Use Listing for COVAXIN, Say Sources.

Further, Ghebreyesus stated that countries vaccinating children and other low-risk groups now "do so at the expense of health workers and high-risk groups in other countries".

"We must be very clear: the pandemic is not over, and it will not be over until and unless transmission is controlled in every last country," he said. COVID-19 Vaccination in India: On-Site Registration Allowed at Government Vaccine Centres For 18-44 Years Age Group.

The global health body chief urged all countries to increase surveillance, testing, sequencing, and sharing information; surge supplies needed to protect health workers; fight misinformation and disinformation; empower people and communities to play their part; support businesses and workplaces to take steps to open up safely, where appropriate; implement national vaccination strategies, vaccinate those most at risk, and donate vaccines to COVAX.

(The above story first appeared on LatestLY on May 24, 2021 08:57 PM IST. For more news and updates on politics, world, sports, entertainment and lifestyle, log on to our website latestly.com).