Donald Trump Denies Iran's Claim of Killing 80 US Soldiers in Iraq in Missile Attack, Says Will Impose Tougher Sanctions on Iran, Not Worried About Oil Supply 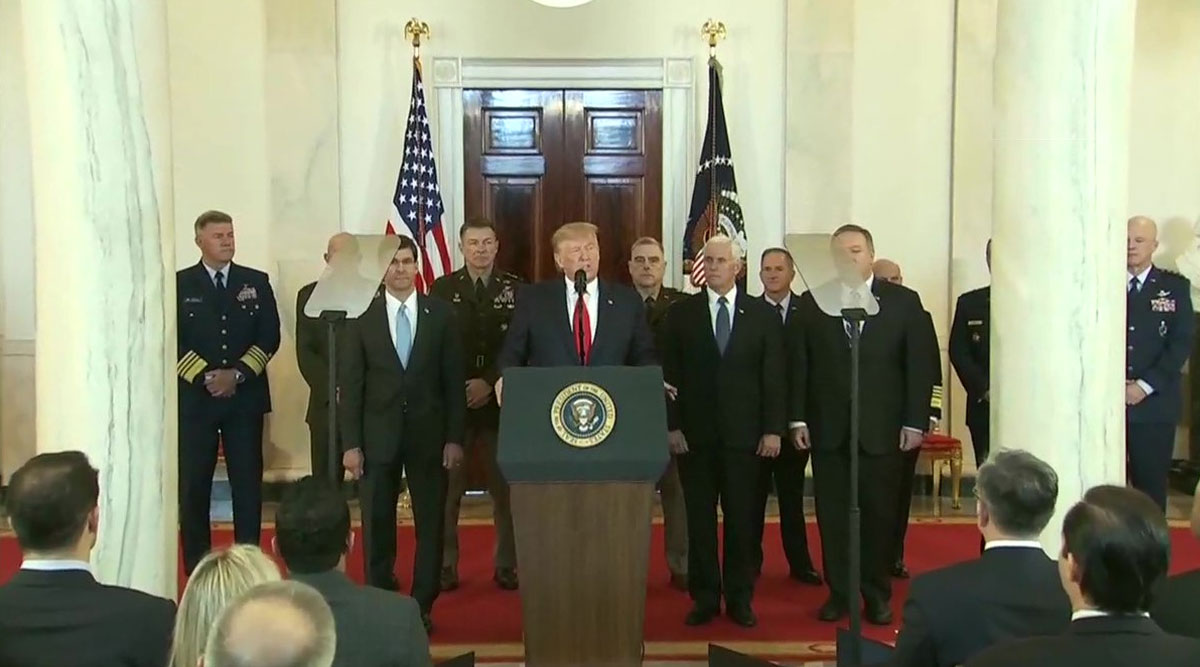 Washington DC, January 8: US President Donald Trump on Wednesday denied Iran’s claim of killing 80 US soldiers in a missile attack on its military bases in Iraq on Wednesday. Trump in his address to his nation Trump gave a stern waning to Iran by threatening to impose tougher sanctions. The US President said, “No Americans were harmed in last night's attack by the Iranian regime. We suffered no casualties. All our soldiers are safe, only minimal damages were sustained at our military bases.” Iraq: Pro-Iran Factions Ramp Up Threats Against US After Tehran's Ballistic Missiles Attack on American Troops.

Trump asked NATO countries to get more involved in the Middle East. The US President also said that the US is preparing to impose tougher sanctions on Iran. He added, "As long as I am the President, Iran will never be allowed to have nuclear weapon." Trump added that his country is not worried about the oil supply. However, the US President hinted that his country do not want war a war with Iran.

In a statement, Trump said, "We are constructing many hypersonic missiles. The fact that we have this great military and equipment, however, does not mean we have to use it. We do not want to use it."

US President Trump: No Americans were harmed in last night's attack by the Iranian regime. We suffered no casualties. All our soldiers are safe, only minimal damages were sustained at our military bases. https://t.co/5dW17stxwk

Trumps statement came moments after Iran’s attack.  Iran on Wednesday claimed that 80 US soldiers were killed after it attacked US air bases at al-Asad and Arbil in Iraq. Minutes after the attack, the US President issued a statement via Twitter, claiming that "All is Well". Iran Informed Us of Missile Attack at US Military Bases, Says Iraq's Prime Minister's Office.

He tweeted, "All is well! Missiles launched from Iran at two military bases located in Iraq. Assessment of casualties & damages taking place now. So far, so good! (sic)," Trump said in his initial reaction Twitter. "We have the most powerful and well-equipped military anywhere in the world, by far! I will be making a statement tomorrow morning (sic)." Iran’s Supreme Leader Ayatollah Ali Khamenei termed the attack as “slap in the face” of the US.