Earthquake in Indonesia: Death Toll Rises to 162 As Strong Quake Wrecks Havoc in Java, Over 700 Injured; Number of Fatalities Likely To Increase

At least 162 people were killed and hundreds more injured as a 5.6 intensity earthquake shook Indonesia's main island of Java on Monday, reports said. 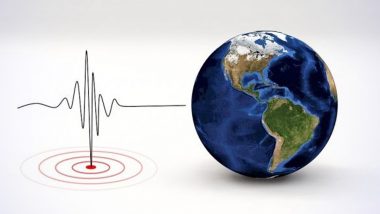 The quake struck Cianjur town in west Java, at a depth of 10 km, according to US Geological Survey data. Earthquake in Indonesia: 162 Killed, Hundreds Injured After Quake of Magnitude 5.6 Strikes Java Island.

The area where the quake struck is densely-populated and prone to landslides, with the makeshift houses reduced to rubble in many areas, the BBC reported.

Rescuers were working into the night to try to save others thought to still be trapped under collapsed buildings. ‘India Stands in Solidarity With Indonesia’, Says EAM S Jaishankar After Earthquake in Java Kills 46.

Regional Governor Ridwan Kamil said 162 people were killed, over 700 injured, and more than 13,000 people displaced by the disaster, the BBC reported.

He apprehended that the numbers of injuries and fatalities were likely to increase because there were "a lot of people" still trapped at the scene.

Earthquakes are common in Indonesia, which sits on the "ring of fire" area of tectonic activity in the Pacific, with a 2018 quake in Sulawesi leaving over 2,000 dead.

(The above story first appeared on LatestLY on Nov 21, 2022 10:24 PM IST. For more news and updates on politics, world, sports, entertainment and lifestyle, log on to our website latestly.com).