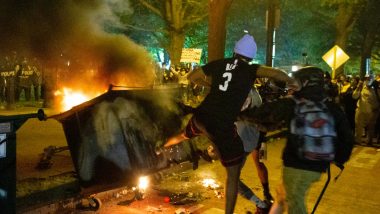 Demonstrator kicks a burning dumpster outside of the White House. (Photo Credits: AFP)

Washington, May 31: Several hundred people angrily protesting the death of an African-American man in police custody in Minneapolis rallied outside the White House on Friday, in tense scenes that have spread to several cities across the country.

President Donald Trump was in the mansion during the protest that converged on a park across the street from the White House, where several dozen Secret Service agents lined barricades.

Demonstrators wielded signs saying "Stop Killing Us" and called for justice for George Floyd, who died on Monday after a white police officer pressed his knee down on the neck of an unarmed and handcuffed Floyd for several minutes. George Floyd Death: Why US is Raging in Protests by African-Americans And Other Key Details.

Serious clashes were largely averted outside the White House, and demonstrators marched down Washington streets towards the US Capitol.

Floyd's violent arrest and death was caught on a video that went viral, and re-opened the nation's deep wounds over racial inequality.

The arrest and charges of third-degree murder filed against Minneapolis police officer Derek Chauvin apparently have not tamped down the anger in Minneapolis, which has been rocked by three days of fiery riots that devastated parts of the city. Protesters remained on the streets Friday night, defying an 8 pm (0100 GMT) curfew. Protests had also spread to New York, Houston, Atlanta, Detroit, Las Vegas, San Jose and Memphis.

(The above story first appeared on LatestLY on May 31, 2020 11:00 PM IST. For more news and updates on politics, world, sports, entertainment and lifestyle, log on to our website latestly.com).