Over half a million people were left without electricity in the US state of Louisiana after Category 2 Hurricane Zeta made landfall along the Gulf Coast, authorities said. 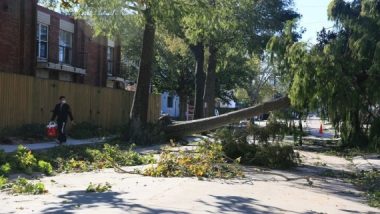 Washington, Oct 30: Over half a million people were left without electricity in the US state of Louisiana after Category 2 Hurricane Zeta made landfall along the Gulf Coast, authorities said.

Local media quoted power companies as saying that power will be restored some time this weekend. In some areas, people have to wait as long as 10 days before the service is restored.

Many of the outages were the result of 200-plus "tree emergencies" reported to New Orleans officials in the aftermath of Zeta. Some trees ripped down power lines, local media reported.

According to the National Hurricane Center, Zeta, the 11th of the 2020 Atlantic hurricane season, has downgraded to a tropical storm.

At least three deaths were reported due to the storm in Louisiana, Mississippi and Georgia.

This year's season has so many storms that the hurricane center has turned to the Greek alphabet after running out of official names.

Zeta is the furthest into the Greek alphabet the Atlantic season has gone. There was also a Tropical Storm Zeta in 2005.

(The above story first appeared on LatestLY on Oct 30, 2020 11:13 AM IST. For more news and updates on politics, world, sports, entertainment and lifestyle, log on to our website latestly.com).