Iran says it has begun work on increasing its uranium enrichment capacity, in case its 2015 nuclear agreement with the remaining signees of the JCPOA – France, UK, Germany, Russia and China collapses. 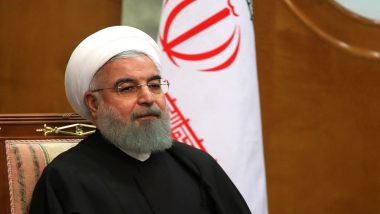 Iran says it has begun work on increasing its uranium enrichment capacity, in case its 2015 nuclear agreement with the remaining signatories of the JCPOA – France, UK, Germany, Russia and China collapses.  The head of Iran's atomic agency told reporters that it was developing infrastructure to build advanced centrifuges at the Natanz facility.

This announcement comes three weeks after the United States announced its withdrawal from the Joint Comprehensive Plan of Action which was an agreement between Iran and the five countries of the United Nations Security Council along with Germany. The deal limited Iran’s access to enriched uranium that it could use to produce nuclear weapons in exchange for the lifting of decades-long economic sanctions.

Iran informed the U.N. nuclear watchdog IAEA in Vienna on Tuesday over its start of a process to increase the country's uranium enrichment capacity, Iran's Atomic Energy Organisation spokesman Behrouz Kamalvandi told ISNA news agency. "In a letter that will be handed over to the International Atomic Energy Agency (IAEA) ... Iran will announce that the process of increasing the capacity to produce ... UF6 (uranium hexafluoride) ... will start on Tuesday," Kamalvandi said.

He said Iran had the capacity to accelerate production of centrifuges, which are used to enrich uranium. The UF6 is a feedstock for centrifuges.

The BBC reports the head of Iran's Atomic Energy Organisation, Ali Akbar Salehi, told reporters on Tuesday that preparations were under way to build new centrifuges. "If we were progressing normally, it would have taken six or seven years, but this will now be ready in the coming weeks and months," he said.

Salehi said this was in line with instructions from Supreme Leader Ayatollah Khamenei, who has ordered officials to be prepared to step up enrichment if the nuclear deal - known as JCPOA - falls apart completely.

The nuclear deal limits uranium enrichment by Iran to 3.67%, far below the roughly 90% threshold of weapons-grade material. Under the agreement, Iran can build parts for the centrifuges as long as it does not put them into operation within the first decade of the deal.

Iran’s decision to announce its work on increasing its capacity to enrich uranium is a signal to the other signatories of the JCPOA to do more to salvage the deal for Iran’s sake and their own. However, one wonders if the pressure will be looked upon kindly in the capital cities of London, Paris or Berlin.

(The above story first appeared on LatestLY on Jun 06, 2018 04:35 AM IST. For more news and updates on politics, world, sports, entertainment and lifestyle, log on to our website latestly.com).