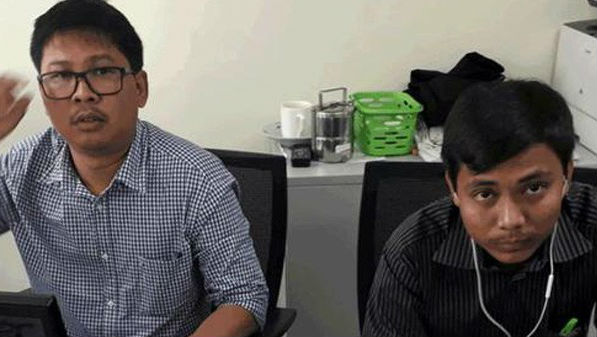 Yangon, April 23: Myanmars Supreme Court on Tuesday rejected an appeal by two Reuters journalists who were sentenced to seven years in jail last year for their reporting on the killings of 10 Rohingya villagers. Wa Lone, 33, and Kyaw Soe Oo, 29, were found guilty in September 2018 of violating the colonial-era Official Secrets Act over their reporting of an alleged massacre in the village of Inn Dinn in Rakhine state. Judicial sources and Wa Lone's wife confirmed the Supreme Court's ruling to Efe news, which was the pair's last chance to have their sentence overturned.

They had already lost a prior appeal at a lower court in Yangon in January. They were arrested in December 2017 in Yangon. The reporters said they were entrapped, a claim backed by the testimony of police captain Moe Yan Naing, who testified earlier this month that a senior officer had ordered him and other subordinates to offer secret documents to Wa Lone as bait. Jailed Reuters Reporters Wa Lone and Kyaw Soe Oo Receives Pulitzer Prize for Revealing Rohingya Muslims Crisis in Myanmar.

The Inn Dinn massacre being investigated by the journalists came during a brutal campaign by the military against the mostly-Muslim Rohingya minority in August 2017 after a series of attacks by an insurgent group of the same ethnicity against around 30 security posts. The investigation by the two journalists led to seven soldiers being sentenced to 10 years in prison, the only case of abuse acknowledged by Myanmar authorities.

The government and military have rejected the conclusions of a special UN commission, which said in a report released in September that the military campaign - which killed an undetermined number of Rohingya and forced the exodus of more than 738,000 members of the community to Bangladesh - showed elements of genocide and ethnic cleansing. Reuters Journalists' 7-Year Jail Term For Violating Official Secrets Act Upheld by Myanmar Court.

The jailing of the journalists, who have denied the charges, has put a question mark over judicial independence in Myanmar, a country that spent decades under a military dictatorship before starting to transition in 2011 towards what one of its powerful generals described as a "disciplined democracy".