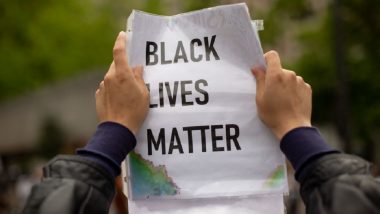 Washington, June 6: The killing of George Floyd and subsequent protests redraws attention towards the United States' history marred in systematic racism. Even as the country champions to be the "land of free", the ghastly crimes against African-Americans, along with empirical data, raise doubt on whether the US is yet to dismantle the mindset which promotes racism. George Floyd Death: Pope Francis Says 'We Cannot Tolerate or Turn a Blind Eye to Racism'.

Over 33% of Prison Population

The black community, comprising 13.4 percent of US population, has a way larger share in the prison population. Data released by the US Census Bureau, Bureau of Justice Statistics last year showed around one-third of cumulative prison population comprised of the African-Americans.

While the community's share in prison population is over 33 percent, around 30 percent of inmates are from the White ethnicity -- whose overall population in the United States is 60.4 percent.

As per the government data, an average of around 1,000 African-Americans per 100,000 population of the race are in jail, as compared to only 200 White Americans vis-a-vis their population of 100,000 citizens.

More Prone to be Fatally Shot

The data released by US Census Bureau for 2019 showed that among the 1,004 persons fatally shot by the police last year, included 23,4 percent from the black community. The numbers are way higher than their proportional share in the US population.

On the other hand, the number of Whites killed in fatal shootings by the police account for 36.8 percent, despite their country-wide population being above 60 percent.

The African-Americans fare more adversely as compared to Hispanics or Latin Americans. Despite a population share of 18.3 percent, the community's share in the number of police fatal killings is 15.7 percent.

Even as the violence has receded, peaceful protests seeking expedited justice for Floyd and immediate police reforms continued in several parts of the nation. Demonstrations were held on Thursday at Cadman Plaza in Brooklyn, Washington Square Park in Manhattan and in the New York City.

The final autopsy report, released on Wednesday, further bolstered the protesters as it confirmed that the death of Floyd was a case of "homicide". The 46-year-old died due to asphyxia- a condition arising out of lack of blood-flow to the brain - was he was kneeled on the neck by Minneapolis cop Derek Chauvin for eight minutes and 46 seconds.

(The above story first appeared on LatestLY on Jun 05, 2020 06:41 PM IST. For more news and updates on politics, world, sports, entertainment and lifestyle, log on to our website latestly.com).