UN investigators have issued a new warning saying that those Rohingya who remain in Myanmar continue to suffer a “genocide.” 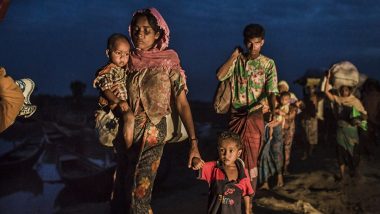 Rohingya refugees cross the Naf River (at the border of Bangladesh and Myanmar) (Photo: UNHCR/Andrew McConnell)

A month after UN’s Fact-Finding Mission issued a hard-hitting report concluding that widespread and systematic violence against Myanmar’s minority Muslim Rohingya community had taken place, UN investigators have issued a new warning saying that those Rohingya who remain in Myanmar continue to suffer a “genocide.”

Marzuki Darusman, chair of the UN fact-finding mission on Myanmar, said thousands of Rohingya are still fleeing to Bangladesh, and the estimated 250,000 to 400,000 who have remained following last year’s brutal military campaign in the Buddhist-majority country “continue to suffer the most severe” restrictions and repression. “It is an ongoing genocide that is taking place at the moment,” he told a news conference on Wednesday.

Up to seven lakh Rohingya have fled to Bangladesh and are living in refugee camps.

Darusman also spoke strongly against a “hardened position” adopted by the Myanmar Government, its “continued denials” and “attempts to shield itself [citing] national sovereignty” as the greatest obstacles to ensuing accountability, rule of law and respect for human rights in the country.

Darusman reiterated the call inside the 15-member Security Council on Wednesday afternoon: “Unless impunity is addressed, violence and its associated atrocity crimes will continue to occur,” he said.

Yanghee Lee, the UN Special Rapporteur on the human rights situation in Myanmar, laid the blame at Aung Sang Suu Kyi-led civilian government, saying “it can do a lot” to address the situation, said Lee, adding: “but they are either tacitly or explicitly choosing not to do anything.”

Even as coutnries like Bangladesh and India host Rohingya refugees, the government of these countries have called for their repatriation. India recently sent back seven Rohingya despite calls to not do so. Similarly, Bangladesh’s prime minister Sheikh Hasina has repeatedly called for starting the process of repatriation as her country bears the burden of housing and feeding the refugees.

But Yanghee Lee categorically said conditions in Myanmar are not conducive for repatriation, “There’s been a lot of progress in terms of economic development and infrastructure, but in the area of ’democratic space’ and people’s right to claim back their land … there is no progress.”

“The repatriation is not possible now,” she stressed. “I will not encourage any repatriation. Conducive conditions means they should not go back to the existing laws, policies and practices … the oppressive laws, the discrimination. The minimum they need is freedom of movement, access to basic health services.”

“Right now, it’s like an apartheid situation where Rohingyas still living in Myanmar … have no freedom of movement,” Lee said. “The camps, the shelters, the model villages that are being built, it’s more of a cementing of total segregation or separation from the Rakhine ethnic community.”

(The above story first appeared on LatestLY on Oct 25, 2018 04:01 AM IST. For more news and updates on politics, world, sports, entertainment and lifestyle, log on to our website latestly.com).