Some 3,000 Americans have volunteered to fight in Ukraine against the Russian forces trying to invade the country, a media report said citing a representative from Kiev's embassy in Washington. 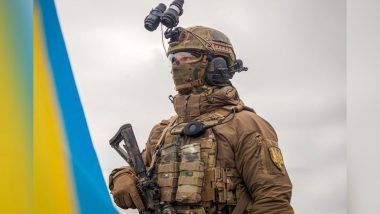 Washington, March 6: Some 3,000 Americans have volunteered to fight in Ukraine against the Russian forces trying to invade the country, a media report said citing a representative from Kiev's embassy in Washington.

The representative told VOA News that the "volunteers have responded to Ukraine's appeal for people to serve in an international battalion that will help resist Russia's invading forces". Amid Russia-Ukraine Crisis, Sean Penn Opens Up About His Meeting With President Volodymyr Zelenskyy (Watch Video).

"Many more have stepped forward from other countries, most from other post-Soviet states such as Georgia and Belarus," the official added. The development comes after Ukrainian President Volodymyr Zelensky on March 3 announced the formation of an "international legion" of 16,000 foreign volunteers, who he said were being asked to "join the defense of Ukraine, Europe and the world", VOA News reported.

"We have nothing to lose but our own freedom," the President had said. Since Russia began its invasion on February 24, Ukrainian officials have urged foreign volunteers to help fight the war.

Western countries are not sending troops to fight on the ground in Ukraine, but have been delivering arms to the war-torn nation, reports the BBC. They have also brought in punishing economic sanctions against Russia and Russian oligarchs and leaders.

(The above story first appeared on LatestLY on Mar 06, 2022 10:55 AM IST. For more news and updates on politics, world, sports, entertainment and lifestyle, log on to our website latestly.com).