In another blow to the ongoing political crisis in Lebanon, Prime Minister-designate Saad Hariri announced his resignation after failing to form a non-partisan cabinet, following which protests erupted across the country. 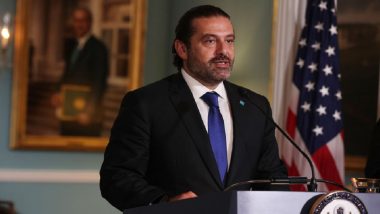 Beirut, July 16: In another blow to the ongoing political crisis in Lebanon, Prime Minister-designate Saad Hariri announced his resignation after failing to form a non-partisan cabinet, following which protests erupted across the country.

"I have just met with the President who informed me about his rejection to some of the names mentioned in my last cabinet line-up. The President told me that we will not be able to cooperate together in forming a new government," Hariri said after his meeting with President Michel Aoun at the Baabda Palace here on Thursday. South Africa Violence: 72 Killed in Violence Over Jailing of Former President Jacob Zuma.

Hariri said he had offered to give the President more time to reconsider, but added: "It is clear we will not be able to agree."

"That is why I excused myself from forming the government. May God help the country."

In a statement, Aoun said: "What is the use of one additional day if the door to discussions was closed."

He added that he would soon set a date for consultations on a replacement.

Lebanon has been going through its worst economic and financial crisis, exacerbated by the absence of an efficient government capable of implementing structural reforms to unlock billions of US dollars in international aid.

The country has been running without a cabinet since August 10, 2020, when caretaker Prime Minister Hassan Diab resigned following the Beirut port's explosions which killed more than 200 and wounded thousands of others.

Hariri was appointed as the new Prime Minister on October 22, 2020, but he has failed to form a new cabinet because of his differences with Aoun over distribution of ministerial portfolios.

The US, France, Russia and other international actors have been pressing Lebanon to form a cabinet to save the country from collapse.

Political experts have warn about complete chaos after Hariri's resignation.

Major highways south of the capital were also targeted by demonstrators.

Roads in the cities of Tripoli and Sour were also blocked.

In response to Hariri's decision, the Lebanese pound on Thursday nosedived to a record low of about 21,150 pounds to the US dollar on the black market.

The currency has now lost 90 per cent of its value.

Amid the crisis, at least half of Lebanon's population has slipped into poverty, while food inflation is at more than 400 per cent.

(The above story first appeared on LatestLY on Jul 16, 2021 10:17 AM IST. For more news and updates on politics, world, sports, entertainment and lifestyle, log on to our website latestly.com).