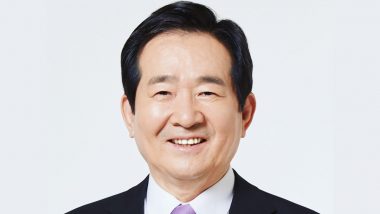 Seoul, February 23: Those who violate social distancing restrictions will not be eligible for an upcoming batch of emergency cash handouts, South Korea's Prime Minister Chung Sye-kyun said on Tuesday. He was warning of stern measures, including the so-called "one-strike, you're out" punishment, amid continued reports of some shops, restaurants and other businesses nationwide breaching a set of rules aimed at curbing the spread of Covid-19, Yonhap reported.

"At invisible places, there are frequent cases of social commitments being ignored," he said during a daily interagency meeting on the coronavirus response, held at the government office complex in Sejong, 120 kilometers south of Seoul.

He cited as an instance night clubs in Seoul that were found to have ignored antivirus rules such as wearing masks, keeping entry logs and limiting the number of entrants during a recent inspection by police and Seoul city officials.  South Korea Cautions Elderly Population Against AstraZeneca-Oxford COVID-19 Vaccine Citing Lack of Sufficient Data.

Businesses violating social distancing rules will face the "one strike, you're out" system with no exception and be excluded from the list of beneficiaries of the fourth round of relief money to be paid soon, Chung added.

The government and the ruling Democratic Party have agreed to allocate this year's first supplementary budget to help the vulnerable, especially the self-employed and owners of mom-and-pop shops troubled by the pandemic. The payment is expected to begin as early as in March.

Chung, meanwhile, expressed expectations over the coronavirus vaccinations to start in the country later this week, saying they are like a ray of hope seen at the end of a dark tunnel. S.Korea Secures Additional COVID-19 Vaccines for 23 Million People, Says Prime Minister Chung Sye-Kyun.

He said chances are high that elderly people here will be given Pfizer-made products that are likely to be shipped additionally between early April and late May.

South Korea's health authorities plan to provide them with AstraZeneca's vaccine after additional checks on its efficacy on the age group, he said during a television interview later Tuesday.

The nation's phase-in vaccination program is scheduled to get under way Friday with the supply by AstraZeneca for the employees of nursing hospitals and facilities and inmates, who are under the age of 65.

Starting the following day, the first batch of Pfizer's vaccines will be offered to tens of thousands of health care workers under the timetable set by the Korea Disease Control and Prevention Agency (KDCA).

The prime minister said he may need to get the first vaccine shot, as a "responsible" government figure, if the public hesitates to do so.

"For now, however, I don't think it's necessary. It appears that I would rather have to wait for my turn," Chung said.

(The above story first appeared on LatestLY on Feb 23, 2021 06:50 PM IST. For more news and updates on politics, world, sports, entertainment and lifestyle, log on to our website latestly.com).