The toll in South Sudan's civil war has long been uncertain, with estimates in the tens of thousands. 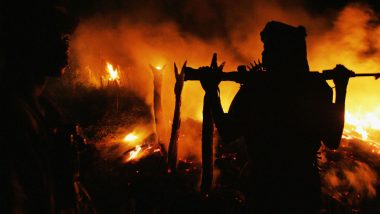 Juba, Sep 26: South Sudan's civil war has caused nearly 400,000 "excess deaths" since fighting erupted in late 2013, a new report funded by the US State Department said Wednesday after years of uncertainty. The report by the London School of Hygiene & Tropical Medicine estimates that "violent injuries" caused about half of those 382,900 deaths. Increased risk of disease and reduced access to health care contributed to others, it said. The toll in South Sudan's civil war has long been uncertain, with estimates in the tens of thousands. "I think this figure is much more realistic than the 50,000 which has been used for so long," Klem Ryan, a former official with the United Nations mission in South Sudan who later served as the coordinator of the UN panel of experts monitoring sanctions on the country, told The Associated Press. South Sudan Rebel Chief Agrees to Sign Peace Deal: Mediator.

Counting the dead in the civil war is difficult as so much occurs in remote locations, Ryan said. "However, that's not justification for not compiling what we did know and pointing to the gaps." The new report, based on statistical modelling and not peer reviewed, says the deaths appeared to peak in 2016 and 2017. Fresh fighting broke out in the capital, Juba, in July 2016 and spread into other regions. Most of the deaths occurred in the country's south and northeast and among adult males, the report says.

"To our knowledge this is the first comprehensive estimate of how many people have died because of the war," Francesco Checchi, a lead investigator on the study, told the AP. "Every day that goes by, hundreds more lives may be lost." The striking new estimate comes weeks after the warring sides signed what the government called a "final final" peace deal to end the conflict.

It returns rebel leader Riek Machar to his role once again as vice president to President Salva Kiir, a situation that sparked the conflict when their supporters clashed along ethnic lines. South Sudan's Warring Leaders Sign Peace Deal to Share Power.

The United States and others have expressed skepticism that this new deal will hold and some fighting has been reported, with each side blaming the other. The civil war also has sent more than 2 million people fleeing in Africa's largest refugee crisis since the 1994 Rwandan genocide. The new report calls for a stronger humanitarian response in one of the world's most dangerous countries for aid workers. The UN has repeatedly called on the government to allow more access. The report "should also spur warring factions to conduct war according to its rules, instead of attacking civilians and humanitarian actors," Checchi said.