Amid the global spread of noval coronavirus, reports on Wednesday arrived that Spain’s Deputy Prime Minister Carmen Calvo has been tested positive for coronavirus. The information was released by the Spanish government on Wednesday, reported global news agency agency. 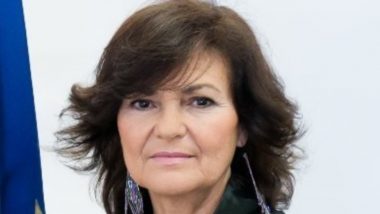 According to a report, published by Reuters India, the Spanish Deputy Prime Minister was tested positive for the virus in a test performed on Tuesday, after previously testing negative. The government informed that the latest test was done as the last one proved inconclusive. The state government stated that Calvo was doing well and receiving medical treatment.

Earlier, reports arrived that the death toll in Spain crossed 3,400 due to coronavirus, making it the second European country with a death toll higher than in China. The Spanish government had said that till Wednesday, over 27,000 people were hospitalised, due to the COVID-19 pandemic. The country's Ministry of Health said that Spain now has at least 47,610 coronavirus cases, out of which nearly 8,000 people were confirmed to have the virus in the past 24 hours, reports NPR.

Meanwhile in Italy, the death toll due to coronavirus reached to 7,503, which is more than double the 3,285 deaths reported in China. On Wednesday, it reported 683 new deaths, while the confirmed case rose to 74,386. More than 19,000 people worldwide have died from COVID-19.

(The above story first appeared on LatestLY on Mar 25, 2020 10:56 PM IST. For more news and updates on politics, world, sports, entertainment and lifestyle, log on to our website latestly.com).