"Without a doubt, all perpetrators and those who ordered this vicious, flagrant act will be punished soon with the hard work of powerful security forces," Rouhani said in a statement from the presidential office. 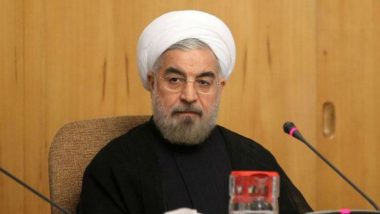 Tehran, February 14: Iranian President Hassan Rouhani said on Thursday that the masterminds behind the deadly suicide bomb attack against the country's Islamic Revolutionary Guard Corps (IRGC) that claimed 27 lives will be brought to justice. At least 13 others were injured when a suicide bomber targeted a bus carrying IRGC members on a highway near the city of Zahedan, located close to the borders of Pakistan and Afghanistan in Iran's Sistan-Balochistan province, on Wednesday. According to the semi-official news agency Fars, Jeish al-Adl, a Sunni extremist group, claimed responsibility for the attack.

"Without a doubt, all perpetrators and those who ordered this vicious, flagrant act will be punished soon with the hard work of powerful security forces," Rouhani said in a statement from the presidential office. Jammu And Kashmir: Suicide Attack Kills 40 CRPF Jawans in Pulwama, JeM Releases Terrorist Aadil Ahmed’s Photo Who Carried Out Fidayeen Strike.

"This crime is another shame in the dark history of the main sponsors of terrorism at the White House, Tel Aviv and their regional agents who are making ridiculous, airy attempts for promoting Iranophobia and claiming to be fighting terrorism and creating security for the Middle East," Rouhani added. He offered his condolences to the relatives of the victims and wished the wounded a speedy recovery, Efe news reported.

Meanwhile, Iranian Foreign Minister Mohamed Javad Zarif linked the attack to the US-organized Middle East summit in the Polish capital Warsaw. "Is it no coincidence that Iran is hit by terror on the very day that Warsaw Circus begins... the US seems to always make the same wrong choices, but expect different results," Zarif tweeted.

The region of Sistan-Balochistan is predominantly populated by the Baloch ethnic group, who are also present in the adjacent regions of Pakistan. A previous attack by gunmen disguised as soldiers on a military parade in the Iranian city of Ahvaz last September killed at least 29 people, including 12 members of the IRGC. That attack was claimed by the Islamic State terror organization.

(The above story first appeared on LatestLY on Feb 14, 2019 08:57 PM IST. For more news and updates on politics, world, sports, entertainment and lifestyle, log on to our website latestly.com).