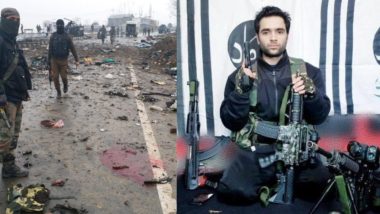 JeM terrorist Aadil Ahmad who carried Fidayeen attack in Awantipora on Thursday and a scene from the spot. (Photo Credit: IANS/Twitter)

Pulwama, February 14: At least 40 CRPF jawans were martyred in the deadliest attack in Jammu and Kashmir in last two decades on Thursday when a Jaish-e-Mohammed terrorist Aadil Ahmad alias Waqas Commando of Gundi Bagh in Pulwama rammed the convoy of CRPF with a Mahindra Scorpio, bearing more than 350 kgs of explosives. The suicide attack was carried out in Awantipora area of Pulwama district when the convoy of 70 vehicles of the 76th Batallion of the CRPF was plying from on the Srinagar-Jammu highway in Goripora area. Claiming responsibility, the JeM has released an image terrorist Aadil Ahmed and an old video in which he is seen pledging to destroy the country’s peace.

With the disturbing images of the heinous and coward attack being circulated in the social media and the incident being taken as the most disastrous attack in decades, the Union Ministry has taken a serious note of it. Condemning the heinous attack, Prime Minister Narendra Modi took to Twitter and said that sacrifices of the brave soldiers would not go in vain and has spoken to Union Home Minister Rajnath Singh to look into the matter seriously. Jammu And Kashmir: 26 CRPF Jawans Martyred in JeM Attack in Awantipora.

Attack on CRPF personnel in Pulwama is despicable. I strongly condemn this dastardly attack. The sacrifices of our brave security personnel shall not go in vain. The entire nation stands shoulder to shoulder with the families of the brave martyrs. May the injured recover quickly.

Spoke to Home Minister Rajnath Singh Ji and other top officials regarding the situation in the wake of the attack in Pulwama.

Given the charge of monitoring India’s security, National Security Advisor Ajit Doval is personally monitoring the situation and Union Home Minister Rajnath Singh has cancelled all his meeting scheduled for tomorrow. The Home Ministry has informed that Singh would visit Pulwama and take a stock of the situation and discuss on the future course of action.

According to the latest inputs from the Union Ministry, tough actions are expected around the corner and the possibility of another ‘Surgical Strike’ can also be on the cards. However, currently, no such reports are being thought, assured the ministry.

Briefing more about the incident, Director General of CRPF, Vijay Kumar, told the news agency ANI that in convoy around 2,500 security personnel were crossing the Srinagar-Jammu highway in Goripora area when the deadly attack took place. He said, “Senior officers are at the spot, and an investigation is underway. The injured are being taken care of.”

He also informed that the bus which was attacked was carrying 39 brave soldiers. Though he denied to state the number of casualties, he confirmed that all the injured soldiers are being treated in the nearest hospital. However, Kumar stated that the death toll could be more than 20 and may rise with time.

As per the information, the 2,500 personnel were being transported at one go because the Srinagar-Jammu highway had been shut for the last two days due to bad weather. All these personnel’s convoy had left Jammu around 3.30 pm.

Soon after the attack, the Jammu and Kashmir Governor Satya Pal Malik urged all the Security Forces Commanders to enhance surveillance on every front and directed the District and Divisional Civil and Police Administration to immediately review the security management of all important installations and establishments. He has even stated that the attack was carried out with the help from across border, i.e. Pakistan.

Condemning the attack on the CRPF convoy, Congress president Rahul Gandhi offered his condolences to the families of the affected families. Along with him, PDP chief and state’s former chief minister Mehbooba Mufti and NC vice president Omar Abdullah expressed their condolences.

I’m deeply disturbed by the cowardly attack on a #CRPF convoy in J&K in which many of our brave CRPF men have been martyred and a large number wounded, some critically. My condolences to the families of our martyrs. I pray for the speedy recovery of the injured.

Disturbing news coming in from #awantipura . Twelve of our security personnel have been martyred and several have been injured. No words are enough to condemn the gruesome terror attack. How many more lives will be snuffed out before this madness ends?

Terrible news coming from the valley. A number of CRPF soldiers are reported to have been killed & injured in an IED blast. I condemn this attack in the strongest possible terms. My prayers for the injured & condolences to the families of the bereaved. #Kashmir

It is to be known that the deadliest attack on the CRPF convoy weeks after the grenade attacks were hurled at the CRPF camps in Pulwana and other districts of Jammu and Kashmir. Though no casualties were reported in those attacks, the latest one has shook the state and country. The Union Ministry has taken a serious cognisance of the fidayeen attack by the terrorist.

(The above story first appeared on LatestLY on Feb 14, 2019 07:47 PM IST. For more news and updates on politics, world, sports, entertainment and lifestyle, log on to our website latestly.com).