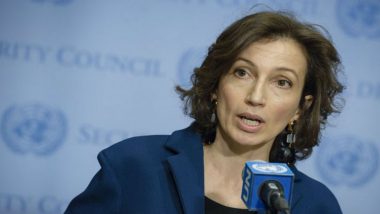 "We should implement measures to preserve the national heritage of Lebanon and we will be holding a meeting for donors' country by the end of September for this purpose," Azoulay said on Thursday during her meeting with Caretaker Culture Minister Abbas Mortada, Xinhua news agency reported. Beirut Blast Destroyed Landmark 19th Century Palace of Ottoman Empire in Lebanon.

Mortada offered a comprehensive study to Azoulay about the number of heritage buildings destroyed in the city following the explosions and the extent of the damage.

The UNESCO has previously warned that 640 heritage buildings have been damaged by the explosions and 60 of them are at risk of collapse.

(The above story first appeared on LatestLY on Aug 28, 2020 08:54 AM IST. For more news and updates on politics, world, sports, entertainment and lifestyle, log on to our website latestly.com).