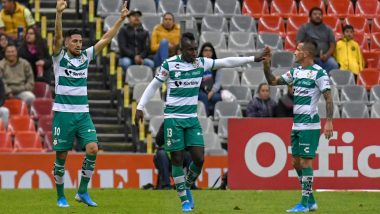 "The LIGA MX reports the following as a result of the medical studies carried out by Club Santos this week -- eight players had positive COVID-19 results. However, they are asymptomatic," Liga MX said in a statement."These players will be constantly observed while maintaining the protocols established by the federal government's Health Secretariat," it added.

However, no names of the players were released by Liga MX. The statement further said, "The LIGA MX will constantly monitor the health of the Club Santos players, as well as all the footballers of the LIGA MX and the LIGA MX Women, always taking into account the recommendations of the health authorities, adopted by the medical areas of each institution.

"Also, Major League Soccer (MLS) on Tuesday announced the cancellation of this year's MLS All-Star Game, Leagues Cup and Campeones Cup due to the coronavirus pandemic.

The 2020 MLS All-Star game was scheduled to take place in Los Angeles at Banc of California Stadium and for the first time feature a matchup between the best of MLS and Liga MX.

The league, in a statement, said that the decisions were taken in order to provide as many available dates as possible for the remainder of the MLS season, which has been suspended since March 12 due to the COVID-19 pandemic.