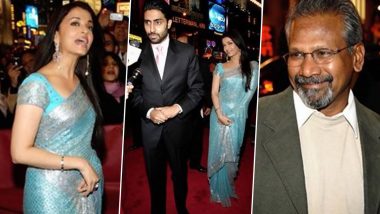 A day after her superhit film 'Guru' clocked 14 years, actor Aishwarya Rai Bachchan on Wednesday recalled the screening of the film. The former Miss World took to Instagram to share a collage of pictures. The collage features a solo picture of Aishwarya, two pictures of her with her co-star and now husband Abhishek Bachchan, and a picture of the director of the film Mani Ratnam from the screening of the film. Amitabh Bachchan Reminisces About Abhishek Bachchan’s Stellar Performance in Guru, Calls It a ‘Fantastic Film’

The 'Dhoom 2' actor penned a short note on how 'Guru' is a film which will 'forever' be special for her. "On this day...14 years...GURU FOREVER," she wrote in the caption. The Kapil Sharma Show: Anil Kapoor Jokes About Doing Films That Abhishek Bachchan and Amitabh Bachchan Reject (Watch Video)

The Mani Ratnam directorial that featured Abhishek and Aishwarya performed significantly well on the box-office and emerged as one of the most successful films of both the actors' career.