Get latest articles and stories on Business at LatestLY. The massive success of HanuMan's teaser shows India's penchant for modern day stories rooted in mythology. 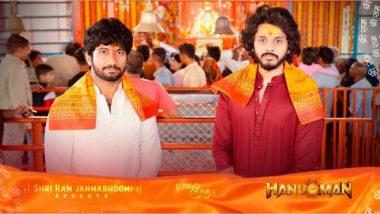 It also proves that one does not need heavy PR or grand-scale events to launch the trailer of their film, all you need is good content that resonates with the audiences!

Though essentially a Telugu superhero film, the film directed and written by Prasanth Varma has established its pan India appeal with the much raved about teaser they launched.

The film is presented by RKD Studios and is produced by K Niranjan Reddy (PrimeShow Entertainment). The teaser has garnered almost 50 Million views (both the Hindi and Telugu versions) and has left the trade startled with the response.

The film whips up a beautiful mix of stories rooted in Indian mythology with modern technology. The film stars Teja Sajja, Amritha Aiyer, Varalaxmi Sarathkumar and Vinay Rai in lead parts. To seek blessings for the film ahead of its release and to thank Lord for the success of the teaser, the director, Prasanth Varma and the hero Teja Sajja visited Ayodhya.

The itinerary included darshan of the major temples at Ram Bhoomi amongst other things. Notably, both the director and the actor were seen in simple Indian attire, and just simply visited the temple to seek the blessings of the lord, without any attention from the media.

Talking about the success, Varma recently said, "We are so thrilled at the response that came our way. When you make a unique film, there's always a risk of it not appealing to people. But with HanuMan there's been resounding love. We wanted to create an international film with the visual spectacle that matches all the glorious superhero flicks we watch but at its heart the storytelling had to be so rooted that everyone in the entire length and breadth of the country should be able to relate with it. We have been able to achieve that and the outpour of love is so reassuring."