Sunrisers Hyderabad on Thursday announced Australia's David Warner as the skipper of their side for the upcoming edition of the Indian Premier League. 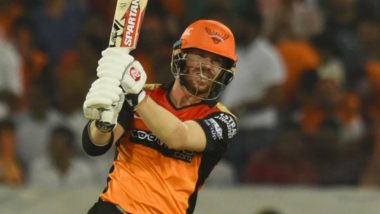 New Delhi, February 27: Sunrisers Hyderabad on Thursday announced Australia's David Warner as the skipper of their side for the upcoming edition of the Indian Premier League.

The franchise confirmed the news on Twitter and said: "#OrangeArmy, our captain for #IPL2020 is @davidwarner31". Along with this, the team also posted a video of Warner, in which the opener said: "I am thrilled to be given the captaincy for this coming IPL, I am grateful for this opportunity, I would like to thank Kane Williamson and Bhuvneshwar Kumar for leading the side last year. I would try my best to help the side lift the trophy this year".

In the 2019 edition of the IPL, New Zealand's Kane Williamson led the side and for a few matches, Indian pacer Bhuvneshwar Kumar too had captained the team.Warner has been in remarkable form since coming back from a one-year ban in international cricket.

The batsman played a knock of 57 runs on Wednesday to help Australia win the three-match T20I series against South Africa.In 2018, Warner along with Steve Smith and Cameron Bancroft were handed a one-year ban for their involvement in a ball-tampering scandal, popularly known as the 'Sandpaper Gate' against South Africa at Cape Town.