Taking to Instagram, the 'He-Man' of Bollywood posted a video clip of him crooning Abhi na jao chhod kar. 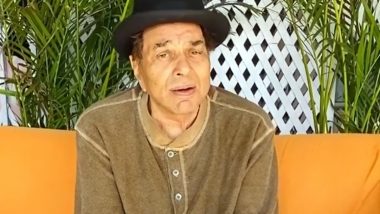 Veteran actor Dharmendra on Thursday treated his fans with a glimpse of his singing skills. Taking to Instagram, the 'He-Man' of Bollywood posted a video clip of him crooning 'Abhi na jao chhod kar'. "My favourite song. Friends, love you for your loving response to my previous post," Dharmendra captioned the clip, in which he is seen sporting a casual look. The original track can also be heard in the background. Dharmendra Starts Water-Aerobics Along With Yoga, Proves Age is Just a Number for the Veteran Actor (Watch Video).

The evergreen 'Abhi na jao chhod kar' was sung by Asha Bhosle and Late Mohammed Rafi for the 1961 released movie 'Hum Dono', which starred Dev Anand and Sadhna. Dharmendra's video has left fans in awe of him. "Love you sir. You brought a smile to my face," a user commented. "Sir, you are the sweetest. Keep smiling like this always," another one commented. Dharmendra Deol Introduces Sunny Deol’s Younger Son Rajveer and Announces His Debut Film.

Dharmendra is quite active on social media. He often gives sneak peek of his personal life by sharing videos and pictures from his daily routine. A few days ago, the 85-year-old star shared a video of him exercising in a swimming pool. "Friends, with his blessings and your good wishes I have started water aerobics," he had posted. Meanwhile, on the film front, Dharmendra was last seen in the 2018 film 'Yamla Pagla Deewana 2'. He will be next seen in 'Apne 2'. (ANI)