Emma Stone, the star of the upcoming Hollywood movie Cruella, had recently given birth to a baby daughter, the name of whom she had kept under wraps till now. 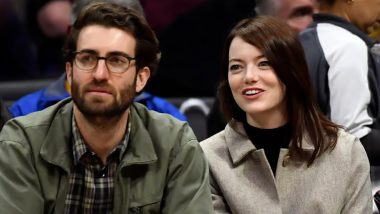 Emma Stone, the star of the upcoming Hollywood movie Cruella, had recently given birth to a baby daughter, the name of whom she had kept under wraps till now. According to TMZ, the birth certificate of Emma and her director husband Dave McCary's daughter reveals that the newborn has been named Louise Jean McCary by her parents. The 'La La Land' star, whose full name is Emily Jean Stone, has named the baby girl as a tribute after her own grandmother's name, Jean Louise. Cruella Official Trailer 2: Emma Stone Is a Beautiful Badass Disney Villain as She Goes Against Emma Thompson’s Baroness – WATCH.

Emma and Dave had welcomed their first child on March 13, but they kept the details on the down-low and it wasn't even known for several days that they had a girl. Earlier a source had told E! News that Emma is "thoroughly enjoying" her time with her little one. The insider close to Emma explained, "Being pregnant and experiencing motherhood has been an incredible experience that she has loved. She could not wait to meet the baby and it has been everything and more. They are thoroughly enjoying down time at home and just being with the baby." Emma Stone on First Child With Husband Dave McCary: Motherhood Has Been Incredible Experience.

Although the Oscar winner is best known for her roles in films like 'Easy A' and the upcoming 'Cruella', the actor "wanted to be a mom for a long time and she is a natural." The source continued, "Dave is a great guy and she feels so lucky that she met him and that they get to do this together. He is a great dad, very hands on and helping every step of the way." Emma and Dave wed in a private ceremony last year. The couple announced their engagement on Instagram in December 2019 with a photo of Emma rocking a gorgeous pearl engagement ring from designer Catbird.