Entertainment News | 73rd Republic Day: Bollywood Films That Will Inspire the Patriot in You

Get latest articles and stories on Entertainment at LatestLY. As India would be celebrating its 73rd Republic Day on Wednesday, the ongoing COVID-19 pandemic has once again altered the celebration a bit, but that can't affect the spirit of our fellow Indians. 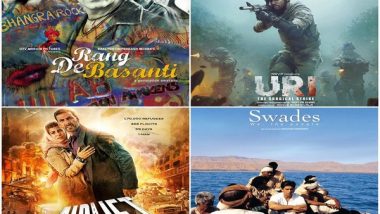 New Delhi [India], January 25 (ANI): As India would be celebrating its 73rd Republic Day on Wednesday, the ongoing COVID-19 pandemic has once again altered the celebration a bit, but that can't affect the spirit of our fellow Indians.

As citizens of a democratic nation, everyone celebrates this day of national importance with great fervour and enthusiasm. The special occasion focuses on cherishing the ideals which formed the basis of the Indian Constitution.

Also Read | Republic Day 2022: From The Family Man, Mumbai Diaries 26/11 to Code M; 10 Patriotic and Hard-Hitting Web Series You Can Binge-Watch on the Occasion.

Hence, even if there are restrictions on the Republic Day celebrations, we can be part of India's patriotic spirit by watching films that mimic this emotion.

There are plenty of patriotic movies made in Bollywood that can leave you teary-eyed with their stories. So you can celebrate Republic Day 2022 by watching any or all of these films to inspire the patriot in you.

Also Read | From The Dark Knight to Avengers Infinity War, 10 Movies Where Villains Triumphed Over Heroes at the End!.

Directed by filmmaker Ashutosh Gowariker, Shah Rukh Khan delivered one of his best performances of all time with 'Swades'. The plot revolved around how a NASA scientist falls in love with his motherland all over again. He decides to relocate to India and dedicates his life to developing his childhood hometown.

The movie proved to be a commercial failure despite positive reviews. However, many feel that it was a celebration of the 'real India' that is synonymous with warmth and tranquillity.

The Aamir Khan-starrer, which was released almost 16 years back, revolved around the journey of a group of close friends and highlighted the need to question those in authority.

The film, which featured tributes to freedom fighters like Chandra Shekhar Azad and Bhagat Singh, among others, emerged as a major hit at the box office while receiving rave reviews.

This movie, which had Akshay Kumar and Nimrat Kaur in the lead, showed the story of a successful businessman stranded in the city of Kuwait set during the time when it got invaded by Iraq and resulted in thousands of Indians getting stuck in the warzone.

The storyline of the movie was inspired by true events and depicted an actual picture of what the Indian citizens went through before being rescued and brought home with the help of the authorities.

This Meghna Gulzar directorial added yet another feather of success to Alia Bhatt's film career. Adapted from Harinder Singh Sikka's novel 'Calling Sehmat', the movie is an inspirational story of a young Kashmiri girl Sehmat Khan, who marries Iqbal Syed, a Pakistani army officer (Vicky Kaushal), and moves to Pakistan as an Indian spy.

Her grit and resilience to help her country by finding out important information from Pakistan makes this movie a brilliant watch.

Starring Vicky Kaushal and Yami Gautam, this movie is no doubt one of the best films one can watch on Republic Day. It's based on true events and revolves around the surgical strike conducted by India on terrorists after the Pulwama attack. The movie became immensely popular among the masses and was a blockbuster.

Bollywood has never been behind in giving due respect to the nation and bringing out the patriotic side in the audience. These films have portrayed the love citizens have towards our nation and how they can do anything and everything for it. Happy Republic Day. (ANI)