Filmmaker Anik Dutta's much-hyped latest venture Aparajito, which is a tribute to auteur Satyajit Ray on his 101st anniversary, has found no slot in Bengal government-run auditoriums. 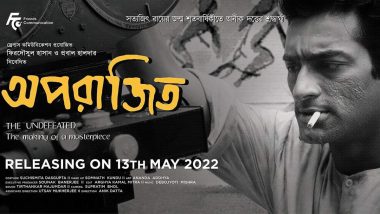 Firdausal Hasan, the producer of the film, said that the screening committee of Nandan – which is considered the cultural epicentre of Bengal – had assured him that the film would be allotted slots, but "what went wrong, I am quite not sure". Dutta, a known critic of the Mamata Banerjee-led government, had earlier, too, run into trouble when his anti-establishment satire 'Bhobisyoter Bhoot' was pulled off cinema halls in February 2019, just days after its release. Thuramukham Release Date: Nivin Pauly, Indrajith Sukumaran, Joju George’s Film to Hit Theatres on June 3 (View Poster).

Several prominent personalities, including actor Soumitra Chatterjee, had then protested against the "attempt to curb freedom of artistic expression". Talking to PTI, Hasan said, "They (Nandan screening committee) liked the film and communicated the same to me and director Anik da. I am not sure what happened after that. We are hoping that audience, who like content-rich Bengali cinema, will be able to see the film in these state-run theatres from next week.”

Repeated calls to Nandan CEO Mitro Chatterjee about the issue went unanswered. A member of the screening committee, who did not wish to be named, said, "I think there are some procedural issues involved. The film might be allotted slots (in Nandan, Cinema Centenary Building) in the coming days."

Dutta, on his part, hoped that procedural issue, if any, would be sorted out soon.

"It isn't feasible for common man, especially college students and regular theatre-goers, to shell out Rs 200 to watch a film in multiplexes. I am hoping that the procedural issues will be sorted out soon, and the film is allotted slots in Nandan,” he stated. Ticket prices in Nandan start from Rs 30.