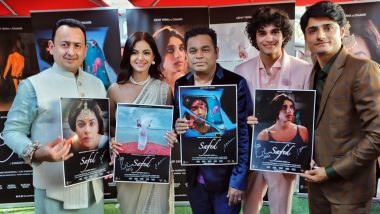 Co-producers Vishal Gurnani and Juhi Parekh Mehta also attended the launch event held over the weekend. "I saw the teaser and it's very intriguing, colourful and very important. I wish the entire team all the best, shine on," Rahman said. Gotham Knights: CW Drops the First Look at the Upcoming Batman Spinoff Show! (View Pic).

Singh said it's a dream come true to get the opportunity to launch the first look of his debut film as a director on the sidelines of the prestigious film festival.

“It's an honour that the world-renowned music composer, A.R. Rahman, has blessed us by launching my directorial debut's first look during the 75th Film Festival at Cannes. It's a dream come true," he said. Safed is presented by Bhanushali Studios Limited and Legend Studios .