Get latest articles and stories on Entertainment at LatestLY. Billy Eichner's upcoming romantic comedy 'Bros' from Universal Pictures has moved its release date from August 12 this year to September 30. 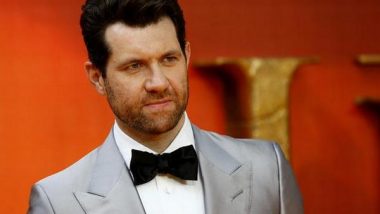 According to Deadline, 'Bros' is the only major studio release on September 30, the weekend before Sony/Marvel's animated 'Spider-Man: Across the Spider-Verse Part 1' debuts.

'Bros' has been billed as "the first romantic comedy from a major studio about two gay men maybe, possibly, probably stumbling towards love. Maybe. They're both very busy."

Eichner stars in the project and co-wrote it with Nicholas Stoller directing. The movie is produced by Judd Apatow, Stoller and Joshua Church (co-producer of 'Trainwreck', 'Step Brothers') and executive produced by Eichner.

Also Read | Knives Out 2: Rian Johnson and Daniel Craig-Starrer Expected To Release on Netflix in Late 2022.

As per Deadline, this news of 'Bros' release delay comes after Paramount today moved Tom Cruise's 'Mission: Impossible 7' from that September 30 date to July 14, 2023. (ANI)