Get latest articles and stories on Entertainment at LatestLY. Ahead of the release of her Camila Cabello starrer 'Cinderella', director Kay Cannon opened up about working with stars Pierce Brosnan and Minnie Driver, who she said make for the perfect King and Queen. 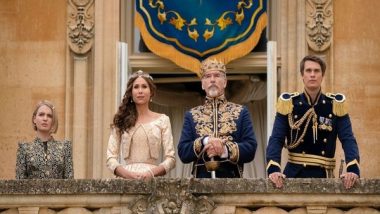 A still from the movie 'Cinderella'

Washington [US], August 28 (ANI): Ahead of the release of her Camila Cabello starrer 'Cinderella', director Kay Cannon opened up about working with stars Pierce Brosnan and Minnie Driver, who she said make for the perfect King and Queen.

In the film, Pierce Brosnan plays the role of King Rowan, the ruler of the mythical kingdom and Minnie Driver will appear as his wife and Queen Beatrice, who is willing to challenge his authority when he gets it wrong.

Talking about what a delight it was to have Brosnan as the King, Cannon shared, "Pierce Brosnan is, after all, Bond...James Bond. He's incredibly charming and has gravitas and wit that give the King some interesting layers. I loved that he was always open to making fun of himself, especially his singing."

For the role of the Queen, Cannon felt lucky to have an actor of Minnie's caliber.

"She has a great singing voice, a dry wit and sharp improve skills. She also hit the dramatic moments and made them land with a stinging ferocity," Cannon said.

The trailer of 'Cinderella' presented the film's stir on the traditional tale, where the princess is chasing her dream to become a fashion designer and open her own boutique -- 'Dresses By Ella'.

As a new-age fairytale, it attempts to offer more layers to the desires and personality of the titular character.

Producers of the film are Leo Pearlman, James Corden, Jonathan Kadin and Shannon McIntosh, and executive producers are Louise Rosner and Josephine Rose.

The film will launch exclusively around the world in over 240 countries and territories on Amazon Prime Video on September 3. (ANI)